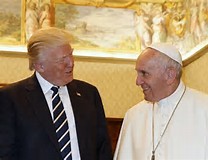 It is not a secret that Trump has not been the strongest supporter of climate change and was a position that was not in agreement with Pope Francis. Climate change and the border wall were a few areas of disagreement between the Pope and Trump during the election. With this in mind, Trump’s recent meeting with the Pope seemed to go very smooth but seemed to have some focus on climate issues. The disputes between the two did not stop them from having a successful first meeting.

The traditional exchange of gifts between the Pope and President was not missed following the recent meeting. The Pope had given the president a gift that symbolized climate change and environmentalism. This could have been because of Trump’s opposition of the Paris Accord and his denial of climate change but Trump did not seem to mind the Popes silent hints. One of the gifts  presented by President Trump was a first edition set of Martin Luther King Jr’s work. Trump’s gift was based off the Popes references to MLK during his last White House visit.

The discussion between Pope Francis and President Trump was behind closed doors and we do not know exactly what was said. It seems that some of the meeting was focused on climate change but both seemed to leave very pleased. There is not very much evidence that Trump will change his views on climate change but there is the possibility that he could make changes to continue to build the relationship. Trump had a very positive attitude after the meeting, which is a good sign for Trump’s first visit to the Vatican.