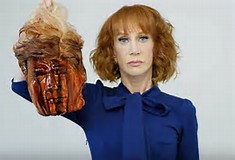 Does not come as a surprise that Kathy Griffin is employed by CNN and has not been let go, following her recent stunt. It seems that posting a photo holding the President’s head covered in blood is where the left has drawn the line. Griffin did release an apology video and had the picture taken down. She is now under investigation by the secret service, which is not a surprise after a ridiculous stunt like this.

I guess no one has ever told her that once you post something, it is out there forever. Griffin put on her website that, “she is not scared to make images that create noise.” The know anti-Trump comedian has gone too far and needs to deal with what is going to come from it. Holding bloody head that is supposed to be President Trump, is taking things to a new level and is offensive in many ways.

Her stunt has even had fellow liberals attacking her. Chelsea Clinton, the daughter of Hillary Clinton, did not hesitate to show her outrage towards Griffin’s Stunt. Clinton took to Twitter to attack her for joking about killing a president. The comments from Chelsea Clinton were a little surprising since she is a fellow liberal and her mother had lost the election to Trump but jokes about killing the president is sickening. Clinton’s reaction shows that there is a line and stunts like this are too far no matter what side of the political spectrum you fall on.

Griffin’s future at CNN is being reviewed but if it was a Fox News reporter they (CNN) would demand that they were let go on the spot. This was not a spontaneous joke; this photo shoot was planned and Griffin had time to decide if she should post the photo or not. She knew what she was doing and what would happen after she posted the ridiculous images, which she has already been ridiculed for by other members at CNN.

Acts like this need to be punished and not ignored by the left. A stunt like this, which includes the president, should not be overlooked and we should not overlook the new levels that the left reached. Not to insight an attack but the left would be acting very differently if this was done by a conservative. Beyond political views, this should never be acceptable and it is sad to see that things have gone this far.