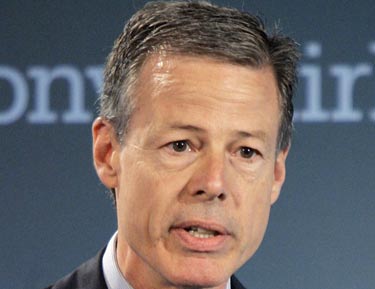 “We’re certainly not going to drop our support for an institution like the Public Theater,” Bewkes said. The CEO was responding to the first shareholder question at the meeting, which targeted the company’s continued sponsorship of the Public — the New York arts organization that has come under fire for its current production of Shakespeare’s “Julius Caesar,” which portrays Caesar as a Donald Trump-like character. Bewkes noted that Time Warner’s financial support for the Public is limited to an emerging-artist development program run by the organization, and that the company offers no financial support for any of its productions, including “Julius Caesar.”

But he defended the Public and the production.

“The point of the play is one that has been debated for probably 400 years,” Bewkes said. “It’s not one that advocates, if you think about the play itself, about Julius Caesar — the killing of Caesar itself raises very important points about how that did not work out well, nor did it accomplish the ends of those senators who did kill Caesar. So I think the weight of opinion has been over the past several hundred years, and why all of us have been assigned it in school, to learn about tyranny, learn about how elected leaders can end up changing what they got elected to. And if the senators who are responding to it engage in, in the case of Caesar, murder, is that a good thing? I think the play on balance says no.”

He added that the Public’s production “is not doing what the critics who haven’t seen the play or read the play are assuming the play is leading the audiences to think.”

Bank of America and Delta Airlines have pulled sponsorship from the Public in response to negative outcry from Trump supporters over the production. Bewkes pointed out that the play has been previously produced with Caesar fashioned after Barack Obama, and that it is common for modern Shakespeare productions to cast classic characters to resemble contemporary public figures.
Bewkes also fended off charges of anti-Trump bias at CNN. He noted that the news network had, during the recent presidential election, been criticized for “uncritically putting a platform out for the current administration. We’ve been charged with having created a platform that enabled it to win the election. Now we’re being criticized for covering the controversies that are emerging from the actions that the administration has taken.” That criticism, Bewkes added, “is not going to stop.” He said that the network is committed to “try to be independent.”

The shareholders meeting was likely the last for Time Warner, which is in the process of being acquired by AT&T in a deal valued at $85.4 billion. Time Warner shareholders voted overwhelmingly in February to approve the merger with AT&T. “We remain on course, pending regulatory review and consent” for the deal to be finalized by the end of the year, Bewkes said in his opening remarks.

Bewkes went on to defend the merger and AT&T’s commitment to continuing the Time Warner’s investment in content — which Bewkes pegged at $15 billion combined for units including HBO, Warner Bros., and Turner Broadcasting. That spending, Bewkes said, “is vital to the ongoing health of the company, which I know that AT&T management really appreciates. It’s why they want to merge with Time Warner, so they can continue and possibly accelerate and possibly increase that investment.”

He added, “Our business, when it combines, will be the largest, fastest-growing part of this new company.”