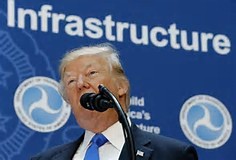 President Trump on Friday chided Qatar for funding terrorism, remarks that could complicate U.S. efforts to ease the diplomatic crisis in the Persian Gulf.

“The nation of Qatar has unfortunately been a funder of terrorism, and at a very high level,” Trump said during a press conference at the White House.

Trump’s comments came just hours after Secretary of State Rex Tillerson called for all sides to de-escalate the conflict, and for other Arab nations to end a blockade against Qatar. Tillerson was in the White House rose garden during the remarks.

A senior administration official told reporters later Friday that Trump and Tillerson are “on the same page” when it comes to Qatar. Regarding the blockade, the official said Trump relayed his position privately to Gulf state leaders this week.

“What he said was consistent with what the secretary of State said,” the official told reporters aboard Air Force One.

“He mentioned that he was concerned with the food issue, the family separation issue. But he’s also very concerned about Qatar support for terrorist finance and for supporting extremist ideology and other things, and he wants to see that addressed, too.”

On Monday Saudi Arabia, the United Arab Emirates, Egypt and Bahrain severed diplomatic relations with Qatar and closed all land, sea and air borders. The countries accused its government of supporting extremist groups such as Hamas, al-Qaeda and the Muslim Brotherhood, and for its relations with Iran.
Qatar has so far denied the allegations.

“I’ve decided, along with Secretary of State Rex Tillerson, our great generals, and military people, the time has come to call on Qatar to end its funding,” Trump said Friday.

“They have to end that funding and its extremist ideology in terms of funding. I want all of the nations to stop immediately supporting terrorism. Stop teaching people to kill other people and filling their minds with hate and intolerance.”

Trump — who traveled to Saudi Arabia last month and met with numerous Gulf leaders at a summit of Gulf Cooperation Council nations — said several nations “came together and spoke to me about confronting Qatar over its behavior,” following the conference.

Tillerson took a more diplomatic approach with the regional dispute earlier on Friday. In a four-minute speech at the State Department, he said Qatar needed to address its neighbors’ concerns about terrorist financing, but asked Saudi Arabia, the United Arab Emirates, Bahrain and Egypt to ease the blockade.

The United States relies closely on nearly all Gulf countries involved in the dispute for military operations in the region.

Saudi Arabia and Qatar both have funded rebels fighting in the Syrian civil war, and about 8,000 to 10,000 U.S. troops are at Udeid Air Base in Doha, Qatar’s capital. Udeid Air Base is the largest U.S. base in the Middle East, the forward headquarters of Central Command and the staging area for much of the war against the Islamic State in Iraq and Syria (ISIS).

U.S. officials have sought to avoid taking sides in the dispute, but Trump earlier this week muddled the administration’s message when he took credit for the decision to cut ties with Qatar, saying his speech in Saudi Arabia calling on Muslim countries to unite against terrorism and Iran was the reason.

“During my recent trip to the Middle East, I stated that there can no longer be funding of Radical Ideology. Leaders pointed to Qatar – look!” Trump tweeted Tuesday.

“So good to see the Saudi Arabia visit with the King and 50 countries already paying off. They said they would take a hard line on funding …. extremism, and all reference was pointing to Qatar. Perhaps this will be the beginning of the end to the horror of terrorism!” he continued later.

The tweets blindsided top U.S. officials who had tried to downplay the issue.

Defense Secretary James Mattis and Tillerson on Monday told reporters it was up to the countries involved to work it out among themselves.

A Pentagon spokesman also on Monday said the United States was “grateful to the Qataris for their longstanding support of our presence and their enduring commitment to regional security.”

(First Reported By The Hill)http://thehill.com/homenews/administration/337162-trump-blasts-qatar-for-funding-terrorism