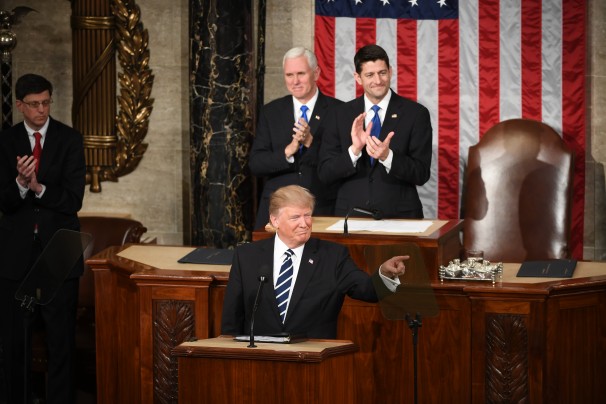 President Donald Trump called on the Congress Wednesday to ensure passage of the two immigration bills – Kate’s Law and No Sanctuary for Criminals Act – slated for a vote in the House on Thursday.

“Countless innocent Americans – including the loved ones of many families in the room with us today – have been killed by illegal immigrants with multiple deportations,” Trump said while addressing a meeting in the White House Cabinet Room Wednesday. The bills “will close the dangerous loopholes exploited by criminals, gang members, drug dealers, killers, terrorists. MS-13 is a prime target,” he added. Trump also met the victims of crimes committed by illegal migrants. Crackdown on undocumented migrants was one of the poll promises made by Trump during the  2016 presidential campaign.

No Sanctuary for Criminals Act will cut federal grant money to cities that “shield dangerous criminal aliens from being turned over to federal law enforcement.” Kate’s Law is expected to increase penalties imposed on criminal aliens convicted of illegal reentry, deterring reentry and keeping criminal aliens off our streets. Both the bills are backed by the White House.

The latter has been dubbed Kate’s Law to commemorate Kate Steinle, the 32-year-old woman allegedly shot and killed July 1, 2015, by Francisco Sanchez, an undocumented immigrant who had already been deported five times and had seven felony convictions.

The two immigration bills were a part of the Davis-Oliver Act approved by the House in May. However, the GOP leadership did not bring the entire David-Oliver Act to a floor vote and chose to schedule two portions of the bill – Kate’s Law and No Sanctuary for Criminals Act.

Criticizing the two bills, the American Civil Liberties Union (ACLU) issued a statement Wednesday. “The true intent of these bills is to empower Trump’s deportation force and anti-immigrant agenda. We urge the House to reject these bills, to defend the Constitution, and protect the rights of all people, no matter their background,” Lorella Praeli, director of immigration policy and campaigns, ACLU, was quoted as saying in the statement.

Kate’s Law, according to the ACLU, limits immigrants’ ability to challenge prior removal orders in court regardless of whether they were lawfully obtained. The No Sanctuary for Criminals Act, on the other hand, would force state and local law enforcement agencies to violate the Fourth Amendment by requiring them to imprison people without due process at the request of federal immigration agents.

Endorsing the two bills, Tom Homan, director of the U.S. Immigration and Customs Enforcement, said Wednesday: “The laws, if passed, would give officers and prosecutors more tools to protect the public. Stiffer penalties for reentry offenders make sense.”

However, the Democrats are likely to oppose the proposed restrictions on the sanctuary cities as the bills are put to floor test, the Hill reported. The term sanctuary city has no legal meaning, however, it is used to describe a city that limits its cooperation with the federal government to enforce immigration law.

Further, a research published by the Pew Centre published April 10 shows that the Federal law agencies are making more arrests in immigrant-related offenses than other crimes — including drug, property, and gun crimes — than they were a decade ago. “Half of the 165,265 total arrests were made by the federal government in fiscal 2014 — the most recent year for which statistics are available — were for immigration-related offenses, such as crossing the border illegally or smuggling others into the U.S. A decade earlier, immigration-related offenses accounted for 28 percent of all the federal arrests,” the study noted.