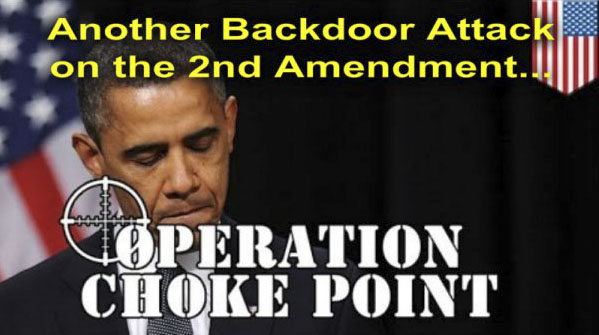 “This is no way for law enforcement to operate,” House Republicans say.

“We share your view that law-abiding businesses should not be targeted simply for operating in an industry that a particular administration might disfavor,” Assistant Attorney General Stephen Boyd wrote the GOP lawmakers in a letter dated Aug. 16.

The letter continued, saying the Federal Deposit Insurance Corporation “subsequently rescinded its list of purportedly ‘high risk’ merchants. The Department of Justice (Department) strongly agrees with that withdrawal. All of the Department’s bank investigations conducted as part of Operation Choke Point are now over, the initiative is no longer in effect and it will not be undertaken again.”

In a joint statement, four House Republicans praised the decision.

“The Obama administration created this ill-advised program to suffocate legitimate businesses to which it was ideologically opposed by intimidating financial institutions into denying banking services to those businesses,” the GOP lawmakers said.

Last week, these five House Republicans wrote a letter to agencies asking for the program to end.

The program uses federal banking regulators to pressure banks out of doing business with entire industries the government declares to be “high risk.” The program expanded to legal business owners who complained they were unfairly denied credit for loans.

The letter from House Republicans signed onto last week to the Justice Department, the Federal Reserve, and the comptroller of the currency said:

We request that your respective departments and agencies issue clear and public formal policy statements repudiating Operation Choke Point and the abuses by financial regulators of the ‘reputation risk’ guidance they developed and promulgated under Operation Choke Point’s auspices. Financial institutions should be given explicit assurance that they may serve these unfairly targeted industries just like any other legitimate businesses. Institutions should also be encouraged to restore long-standing relationships with lawful, targeted industries.

The response issued Friday from the five Republicans continued:

We applaud the Trump Justice Department for decisively ending Operation Choke Point. The Obama administration created this ill-advised program to suffocate legitimate businesses to which it was ideologically opposed by intimidating financial institutions into denying banking services to those businesses. Targeted industries, such as firearms dealers, were presumed guilty by the Obama Justice Department until proven innocent, and many businesses are still facing the repercussions of this misguided program.

This is no way for law enforcement to operate and runs counter to principles enshrined in our Constitution. By ending Operation Choke Point, the Trump Justice Department has restored the Department’s responsibility to pursue lawbreakers, not legitimate businesses.