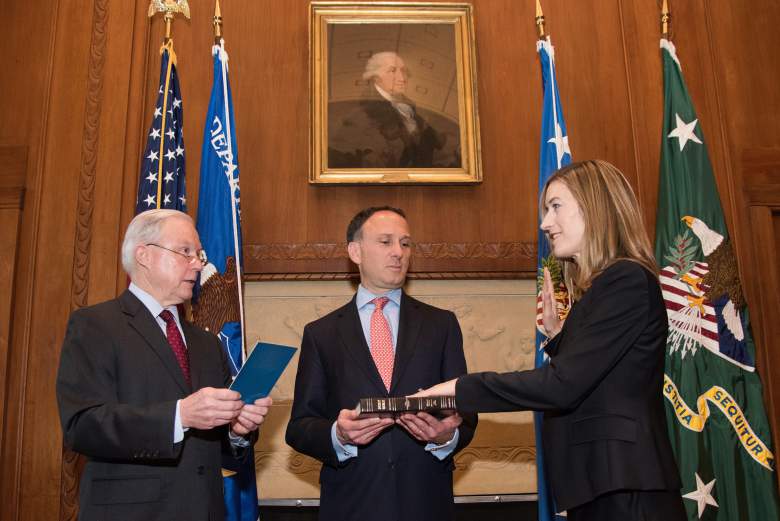 Rachel Brand, a well-respected Republican lawyer who became a partisan lightning rod in the Senate earlier this year, would be the lead official at the Department of Justice overseeing the Russia probe if Deputy Attorney General Rod Rosenstein recuses himself.

Rosenstein, who is now in charge of the probe, is mulling the recusal, according to ABC News.

The deputy attorney general recommended that President Trump fire FBI Director James Comey, a decision that could be a big element of an obstruction of justice probe.

It increasingly appears the special counsel’s investigation will include the question of obstruction of justice, something Trump himself hinted at on Friday.

Democrats are alarmed by the prospect of Brand taking over for Rosenstein, who enjoyed broad bipartisan support during his Senate confirmation process and demonstrated his independence last month by tapping Mueller, a move that reportedly angered Trump.

Brand, the associate attorney general, currently holds the No. 3 leadership role at the Justice Department, putting her in charge of its civil rights, environment and natural resources, tax and anti-trust divisions.

She is a Harvard Law School graduate who clerked for Supreme Court Justice Anthony Kennedy and served as assistant attorney general for the Office of Legal Policy under President George W. Bush.

In her previous stint at Justice, she helped Supreme Court Justices John Roberts and Samuel Alito prepare for their Senate confirmation hearings.

“The prospect of her taking over the investigation certainly raises a lot of eyebrows and is concerning to Democrats. She would have to do a lot to prove she would be an impartial and effective steward of the investigation. The burden of proof would be on her,” said a senior Senate Democratic aide.

Not a single Democrat voted for Brand on May 18.

By contrast, Rosenstein, who is now in charge of the Russia investigation, won Senate confirmation by a vote of 94 to 6.

After clerking for Kennedy after law school, Brand joined the law firm Cooper, Carvin & Rosenthal, which is headed by Charles Cooper, a former senior official in the Reagan administration.

After working in the Bush administration, she joined the public policy practice of another law firm, WilmerHale, where she worked on government litigation, congressional investigations and regulatory affairs.

Democrats acknowledge she has top-shelf credentials but they raised objections over her career in the private sector at the U.S. Chamber of Commerce’s Litigation Center. In that role she often represented powerful corporate interests at odds with average Americans, Democrats say.

“Ms. Brand has long championed deregulation and the rolling back of vital environmental, consumer and labor regulations protecting the American people,” Sen. Patrick Leahy (Vt.), a senior Democrat on the Judiciary Committee, said last month before the Senate voted narrowly to confirm her, 52 to 46.

Leahy asserted in his statement that Brand has in the past “justified indiscriminate surveillance of Americans and defended broad assertions of executive power.”

Other senior Democrats criticized her record.

Sen. Elizabeth Warren (D-Mass.), a leading liberal voice in the Senate, said Brand “has extensive experience, years of experience, fighting on behalf of the biggest and richest companies in the world.”

Senate Democratic Whip Dick Durbin (Ill.) raised concerns about Brand’s refusal to pledge during her confirmation process that she would recuse herself from future department matters involving the Chamber of Commerce, her old employer.
Republicans, on the other hand, praised her nomination.
Senate Majority Leader Mitch McConnell (R-Ky.) touted her qualifications and extensive experience.

“Ms. Brand’s impressive background includes experience clerking for Supreme Court Justice Anthony Kennedy, and she has already been confirmed by the Senate twice before,” he said in a statement.