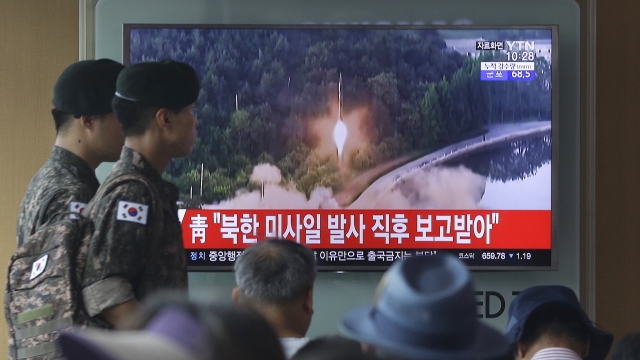 President Donald Trump indicated Wednesday morning that he was giving up on working with China to corral North Korea’s nuclear program development.

“Trade between China and North Korea grew almost 40% in the first quarter. So much for China working with us – but we had to give it a try!” he tweeted:

Trade between China and North Korea grew almost 40% in the first quarter. So much for China working with us – but we had to give it a try!

Trump is expected to meet with Chinese President Xi Jinping at the Group of Twenty (G20) summit in Hamburg, Germany, beginning Friday.

The tweet is the latest sign of growing U.S. pressure on China to help control its ally North Korea, which reportedly test-launched an intercontinental ballistic missile Tuesday. The launch exhibited that North Korea has a missile that could reach Alaska, according to some experts.

On Sunday, Trump “raised the growing threat posed by North Korea’s nuclear and ballistic missile programs” in a phone call with Xi. The U.S. Navy also conducted a freedom of navigation operation near a Chinese-claimed island in the South China Sea, angering Beijing.

Last week, Trump met with South Korean President Moon Jae-in while the Treasury Department issued sanctions against two Chinese individuals, a Chinese shipping company, and a Chinese bank for their ties to those North Korean programs. The State Department also announced a $1.3 billion arms sale to Taiwan, which China considers a renegade province.

National Security Adviser H.R. McMaster said at a national security conference in Washington that China could be doing much more to help, via economic pressure. The administration also put China on a list of worst offenders for human trafficking in the world.

The downward slide in relations is occurring after Trump reached out to Xi this year, inviting him to Mar-a-Lago in April for his first summit with the Chinese leader. It first appeared that China was taking steps to help with North Korea, and Trump backed off from calling China a currency manipulator.

However, since then, North Korea has only sped up its testing of ballistic missiles.

Trump had previously suggested that China could secure more favorable economic deals with the U.S. in exchange for help with North Korea.

Referring to Xi, Trump said on April 20, “I actually told him, I said, you’ll make a much better deal on trade if you get rid of this menace or do something about the menace of North Korea, because that’s what it is. It is a menace right now. So we will see what happens.”

However, Trump’s tweets suggest patience with China is running out.

He also tweeted on June 20 that cooperation with China on North Korea “has not worked out”:

While I greatly appreciate the efforts of President Xi & China to help with North Korea, it has not worked out. At least I know China tried!