The billboards read “THANK YOU PRESIDENT TRUMP, KEEP AMERICA GREAT!” It also asks supporters of the President to send their personal thank you to the web page ThankDJT.com.

The billboards placed by the pro-Trump group follow a similar design to the anti-Trump billboards that read “IMPEACHMENT NOW.” That billboard can be seen below: 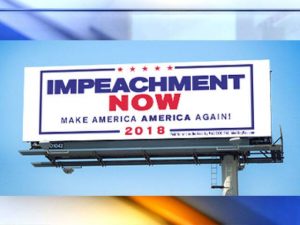