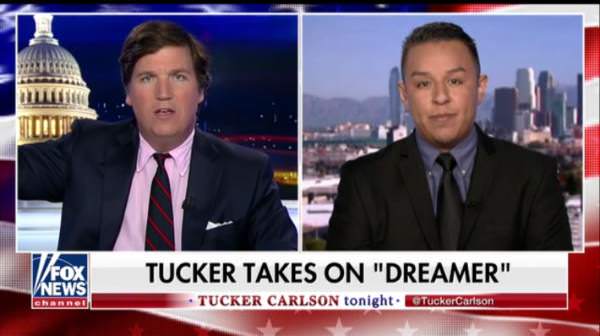 Tucker clearly stated that illegal aliens don’t have the right to demand anything.

As the Gateway Pundit reported earlier, angry illegal aliens stormed House Minority Leader Nancy Pelosi’s Dream Act presser on Monday and got in her face chanting, “Democrats deport!” and “Yes or No??”

Illegal aliens got right in Nancy Pelosi’s face screaming, “Yes or No!”–Pelosi tried to make sense of what they were demanding and asked “To what??”

They were also demanding all 11 million (illegal aliens) get citizenship. Who really knows how many illegal aliens are in the United States. The real number could easily be upwards of 20-30 million plus. As they demonstrated today, DACA isn’t enough. Now it’s a free for all and it’s pizza for everyone.

Tucker Carlson pointed out how ungrateful illegal aliens are after they have benefited from our society. They are demanding, hostile, and show ‘lack of gratitude’.