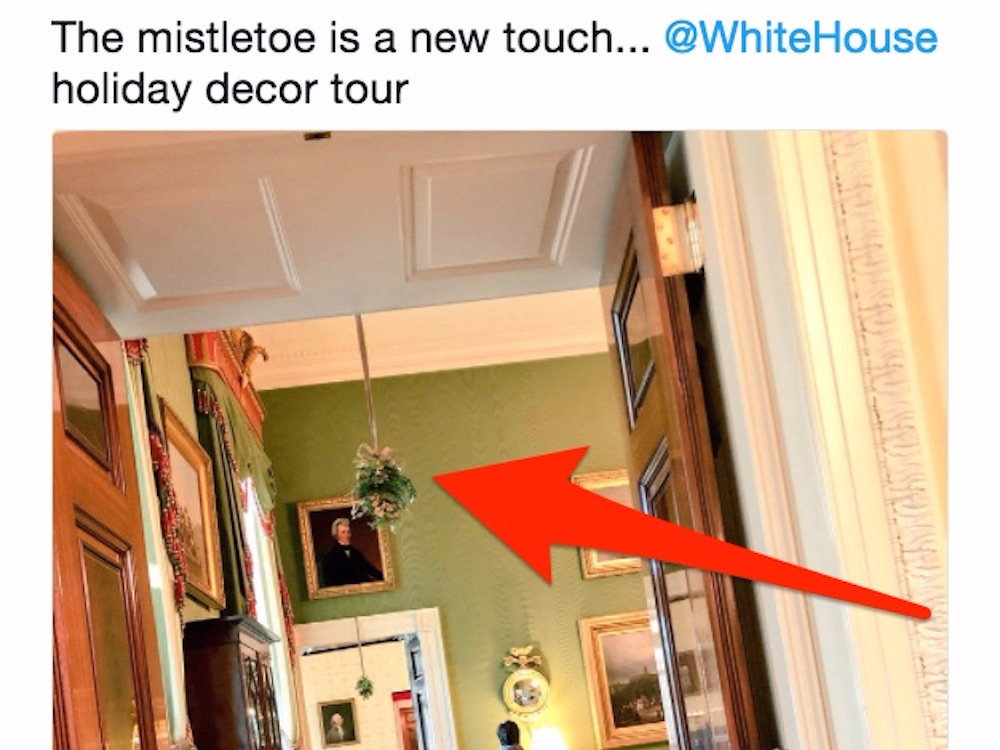 It was only a matter of time before the campaign against sexual harassment in the workplace crossed the line into absurd political correctness — and that time has arrived.

First lady Melania Trump this week unveiled the White House’s incredible Christmas decorations in a wonderful video. If you haven’t seen it, check out the one-minute clip below.

The decorations are up! @WhiteHouse is ready to celebrate! Wishing you a Merry Christmas & joyous holiday season! pic.twitter.com/d6ZuyeFvrw

Eagle-eyed viewers (read: Trump haters) were quick to point out that the decoration including a clump of mistletoe hanging over the door leading into the Green Room. There is much legend behind mistletoe, so here’s a good description of its history from TheHolidaySpot.com:

Kissing under the mistletoe is first found associated with the Greek festival of Saturnalia and later with primitive marriage rites. They probably originated from two beliefs. One belief was that it has power to bestow fertility. It was also believed that the dung from which the mistletoe would also possess “life-giving” power. …

At Christmas time a young lady standing under a ball of mistletoe, brightly trimmed with evergreens, ribbons, and ornaments, cannot refuse to be kissed. Such a kiss could mean deep romance or lasting friendship and goodwill. If the girl remained unkissed, she cannot expect not to marry the following year. In some parts of England the Christmas mistletoe is burned on the twelfth night lest all the boys and girls who have kissed under it never marry. Whether we believe it or not, it always makes for fun and frolic at Christmas celebrations.

Ah, but therein lies the rub: There can be no more fun and frolic — certainly not at a place like the White House. So, as usual, cue the Twitter trolls.

Seems like a not-great idea to have mistletoe hanging in the White House amid a stretch of sexual misconduct stories https://t.co/WrI0sTggf3

Hmmm … watch where you stand, ladies.

Next Trump defense from @PressSec – "but she was under the mistletoe."

Ten days a groping and a partridge in a pear tree.

Harassment stations (aka mistletoe) hung from the ceiling of the WH in this political climate is so perfectly on brand for Trump it hurts.

But here’s the thing: The White house is the people’s house. And over the Christmas holiday (pretty much the entire month of December), thousands and thousands of people will attend receptions there. Sure, they’ll be some ritzy rich people among the guest list, but lots of regular people — those in the military, teachers, school children — will get a chance to stroll through the ornate decorations, too.

Some others on Twitter had had enough of the political correctness run amok.

This is also the home of the President and First Lady along with his married children. There is nothing wrong with mistletoe. You look at EVERTHING this POTUS does and try you hardest to be outraged.

If Obama had done it, you'd love it pic.twitter.com/0FcIX2ixi8

CNN is upset about mistletoe in the White House-because recent sexual allegations."
😡REALLY? So Franken, Spacey,Weinstein, Conyers,Rose etc-🚫KEEP OUT.
Most us can handle mistletoe w/out raping adults OR children.

If all you have to do is complain about the @WhiteHouse having mistletoe as part of its Christmas decorations you really, really need to get a life. #StopComplaining