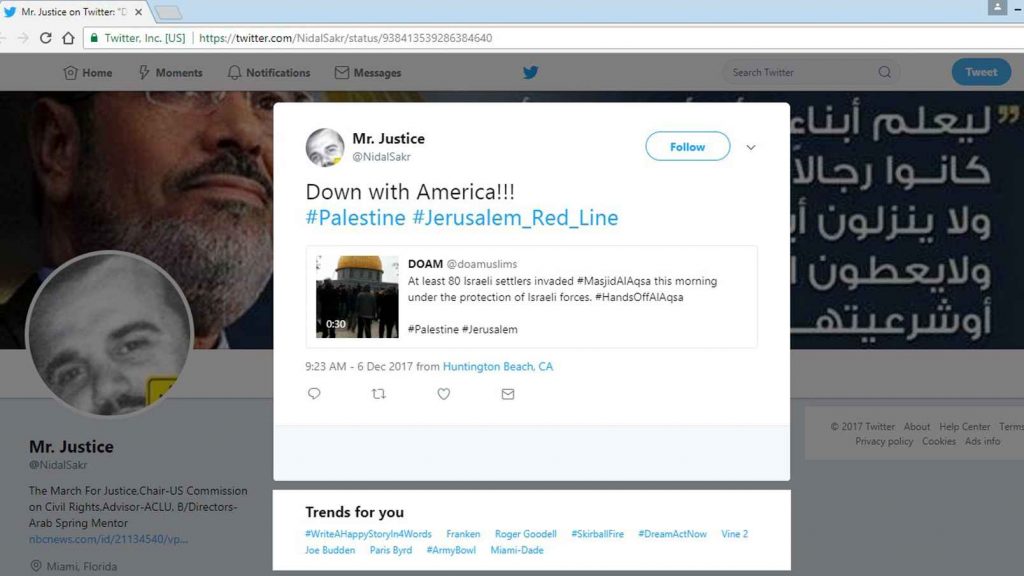 What do you get when you have an individual who was acquainted with the founders of al-Qaeda and recruited into a terrorist cell by one of them; who was sentenced to death for the murder of an Egyptian policeman; who is consistently leveling threats at world leaders; and who is currently living in the United States? The answer can be nothing short of ‘Trouble.’ The individual in question is Muslim Brotherhood operative and Chairman of the March for Justice, Nidal Sakr. Recently, Sakr took to social media to call for the execution of President Trump. He is yet to be punished for his alleged murder. Will he be punished for this crime?

On October 19th, from a location in Huntington Beach, California, Nidal Mohamed Sakr issued the following in a tweet about Donald Trump: “GET RID OF SOB. IMPEACH OR ELSE!!!!!” The next day, Sakr reiterated his threat with even more obscenity. He tweeted, “GET RID OF THE MF. IMPEACH OR ELSE!!!!!” Ten days later, on October 30th, Sakr dropped the warning and outright called for the death of President Trump. He tweeted, “EXECUTE SOB TRAITOR Donald Trump.” And the same day, he tweeted, “Donald Trump, You Are TOAST… I GUARANTEE IT.”

To issue a threat against the President of the United States is a federal crime. As stated in US Code Title 18, Section 871: “Whoever knowingly and willfully deposits for conveyance in the mail or for a delivery from any post office or by any letter carrier any letter, paper, writing, print, missive, or document containing any threat to take the life of, to kidnap, or to inflict bodily harm upon the President… or knowingly and willfully otherwise makes any such threat against the President… shall be fined under this title or imprisoned not more than five years, or both.”

This was not the first time that Sakr has used threatening language against the President. In September, he wrote on Facebook: “FACTS ARE FACTS. Patriotic Americans Will Keep After SOB Donald Trump Until We Nail His ass. YOU WATCH!!” On innumerable occasions, Sakr has stated that Trump must be “sacked.” In August, he said the same for Trump’s family. He posted on his Facebook page, “Ivanka Trump, RUSSIAN BACKDOOR SAUDI/UAE/Israeli PRETTY BOY Jared Kushner MUST ALL BE SACKED. SACK’M ALL.”

In July, Sakr referred to Trump as an “enemy of God” and, in February, he warned Trump, “U come to ISLAM Or ISLAM WILL COME TO YOU.”

Of course, Sakr was furious, when President Trump said the United States was recognizing Jerusalem as Israel’s capital. For over two decades, US Presidents would sign waivers of the Jerusalem Embassy Act of 1995, which mandated that the US Embassy in Israel would be moved from Tel Aviv to Jerusalem. Sakr took to Facebook and Twitter and took out his rage on both Israel and the United States.

On December 7th, Sakr tweeted, “GO FUCK YOURSELVES!!! Terrorist Apartheid Israel will be obliterated. You watch!!!” and (in Arabic) “Expel the Americans from Muslim countries. Close their embassies. And drop everyone who stands in your way. The Price of aggression against Jerusalem is the fall of America and its dogs Israel and Arabs.”

Previously, in September, Sakr tweeted a graphic depicting Jerusalem, a Palestinian flag, and a hand gripping a bloodied knife with the description in Arabic, “Strike back and raise the flag above and across Jerusalem…”

All of this is, no doubt, alarming, but what makes it much more so is the background of the author of the postings, Nidal Sakr, and who Sakr associates with.

Sakr was born in Providence, Rhode Island. He describes himself as “US born from Palestinian origin.” In a videotaped lecture Sakr gave, in October 2012, he claimed that his mother is Egyptian and enlisted in the Muslim Brotherhood (al-Ikhwan al-Muslimin) at an early age, carrying weapons and ammunition for the group. He stated, “Let me be very clear about this. I was born into Ikhwan, and my mother actually is from the first generation of Ikhwan.”

Around 1970, Sakr joined a Brotherhood terrorist cell in Jordan that was conducting paramilitary operations against Israel. According to Sakr, the individual who recruited him into the cell was Abdullah Azzam, the future mentor of Osama bin Laden and co-founder of al-Qaeda. Also according to Sakr, he personally knew bin Laden. He stated, “Osama bin Laden, himself, was a student of Abdullah Azzam at King Abdul Aziz University. I know him personally. I know his brothers.”

Years later, during the Arab Spring, Sakr found himself in Egypt organizing rallies for the Muslim Brotherhood and advising Brotherhood leadership. Things got hot for Sakr and his Brotherhood colleagues, though, when newly elected Egyptian President and Brotherhood leader, Mohamed Morsi, fell victim to a coup against his government by the head of Egypt’s military, Abdel Fattah el-Sisi, who is currently Egypt’s President.

On Facebook, Sakr paints a picture of how dangerous, at the time, it was for him in Egypt. He writes: “Can you Imagine How Horrendous to Be in the Crowd Fired At? I CAN. I Was Fired At by Sisi n RABAA [Square in Cairo] for 12 Hours NON STOP…”

In March 2014, Sakr left Egypt to return to the US. Upon arrival, he was placed in handcuffs and detained. This event took place merely days before he was sentenced to death in Egypt for the murder of an Egyptian police officer.

Today, Sakr is related to addresses in South Florida, where he has resided in the past, and Southern California, where his wife is employed. Sakr has incorporated his nonprofit organization, March for Justice, in both locations.

The only address that Nidal Sakr should be related to in the United States, however, is one that contains prison bars. He is a danger to President Trump and to Americans in general.

Trump’s decision to recognize Jerusalem as Israel’s capital may have pushed Sakr over the edge to the point where he could easily turn from seditious words to hostile aggression. He certainly is no stranger to violence; he is linked to al-Qaeda’s founders and to a murder, and his threats must be taken seriously.

His call to execute President Trump is legally actionable. He should be arrested and taken off the streets immediately.