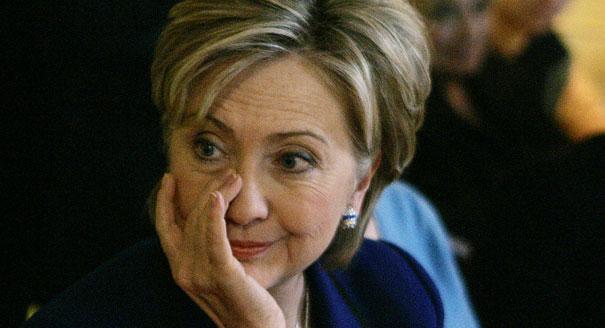 From the Uranium One scandal to rigging the Democrat primary race in 2016, Hillary Clinton is up to her ears in corruption. Underneath the surface is a little known scandal about what Clinton knew concerning Libya’s thriving slave trade and genocidal death squads.

A new CNN investigation has uncovered a network of slave markets operating in warehouses in various cities across Libya six years after NATO-led intervention in the country toppled the government of Muammar Gaddafi in support of US and UK backed rebels. And not only did CNN confirm the presence of slave auctions where human beings are being sold for as little as $400 in “liberated” Libya, but CNN’s crew was actually able to film a live auction in progress, while also gathering the testimonies of multiple victims.

Though CNN’s footage and accompanying report is shocking, such practices have been quietly documented for years, and clear warnings were issued starting in early 2011 that Libya’s black as well as migrant population would be the first to fall victim at the hands of the Islamist Libyan rebels that NATO’s war empowered. From the outset critics of Western intervention in Libya loudly sounded the alarm of a genocide against black Libyans in progress committed by the very rebels the US, UK, France, and Gulf allies were arming – a fact so well-known that then Secretary of State Hillary Clinton was personally briefed and warned on the matter.

One of the few international correspondents to actually report the truth in real time while writing from inside Libya was The Independent’s (UK) Patrick Cockburn. In an August 2011 story he wrote as if attempting to warn the world about the future war crimes to come at the hands of the US-backed rebels.
“The rotting bodies of 30 men, almost all black and many handcuffed, slaughtered as they lay on stretchers and even in an ambulance in central Tripoli, are an ominous foretaste of what might be Libya’s future. The incoming regime makes pious statements about taking no revenge on pro-Gaddafi forces, but this stops short of protecting those who can be labelled mercenaries. Any Libyan with a black skin accused of fighting for the old regime may have a poor chance of survival,” reported Independent UK reporter Patrick Cockburn.

Below is an example of black Libyans being tortured by anti-Gaddafi “revolutionaries” by making them eat the former Libyan flag.

Libya is not the only country where this is happening…

Public slave markets are parting out human beings from West Africa for up to $500 with some being held for ransom while others are forced into labor roles or are sexually exploited.

Armed networks round up the individuals and facilitate the eventual enslavement. Once purchased the usual route for a modern day slave ends with becoming a day laborer working in agriculture or construction.

As migrants continue to pour into Europe – with no sign of stopping anytime soon – the danger now is in keeping your nation safe from this mass exodus of displaced people. 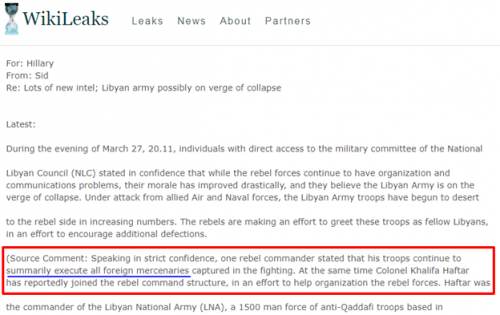 The answer lies in a March 27, 2011, intelligence brief on Libya published by WikiLeaks. The brief, which was made public in 2015 as part of a large batch of Hillary emails released by the State Department, was sent by long time close adviser to the Clinton family and Hillary’s personal intelligence gatherer, Sidney Blumenthal, and contains clear reference to rebels summarily executing “all foreign mercenaries” – which had already become the common euphemism for black Libyans then being targeted by the US-supported rebels.

Source Comment: Speaking in strict confidence, one rebel commander stated that his troopscontinue to summarily execute all foreign mercenaries captured in the fighting…

But even years later, as such race-based war crimes have now been exhaustively documented, Hillary has consistently indicated that she has no regrets. Though her beloved Libyan rebels, legitimized and empowered through broad support from the West, were literally killing people based on the color of their skin, not a single one has ever been convicted in a court of law or punished for their crimes.

What Clinton knew about the African slave trade and death squads is even more shocking in the context of how badly the former Secretary of State managed the removal of Gaddafi and the Benghazi attack.

As The Gateway Pundit’s Joe Hoft reported, the ‘tick tock’ emails show Hillary’s team taking credit for many actions that led to Gaddafi’s toppling in Libya, including, but not limited to: suspending the operations of the Libyan embassy in Washington; evacuating US embassy personnel in Tripoli and closing the embassy there; obtaining sanctions against Gaddafi and his family; working to suspend Libya from the Human Rights Council; appointing Special Envoy Chris Stevens to be the U.S. representative to Benghazi; engaging with UAE, Qatar, and Jordan to seek their participation in coalition operations; holding meetings with House Democrats and Senate Republicans to persuade them not to de-fund the Libya operation; an lastly, Hillary’s State Department worked to construct a $1.5 billion assets package to the TNC.

The Clinton State Department took credit for being the architect behind the overthrow of Gaddafi in Libya and the subsequent horror as a result.

Now new information released earlier this week and reported at Infowars revealed that a peace deal was worked out in Libya in 2011 but when presented to Hillary, she nixed it.

According to the report, General Clark, who was part of the negotiations, was so pleased with the outcome that he personally arranged a teleconference with Hillary Clinton on the line to congratulate those who put the deal together for “getting the job done in the face of such danger.” But there was a problem. Secretary of State Hillary Clinton didn’t want peace.

As a result the war went on and Hillary’s actions in Libya resulted in the eventual death of four Americans in Benghazi, including Chris Stevens.