Poor MSNBC. They looked like they were going to throw up.

White liberals on MSNBC suffered a meltdown Thursday after Kanye West met with President Trump in the White House. 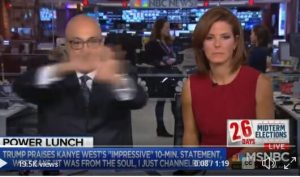 MNBC hosts Ali Velshi and Stephanie Ruhle spiraled into hysteria after Kanye West’s visit with President Trump in the Oval Office on Thursday.

Ruhle: If you think you’re going to get a thoughtful analysis, you’re not! Because that was an assault on our White House.

Velshi: We’re not because you can’t even analyze some of the stuff that was said… That was crazy. That was bonkers…

Ruhle: When he said the reason he was drawn to MAGA is because of “male power.”