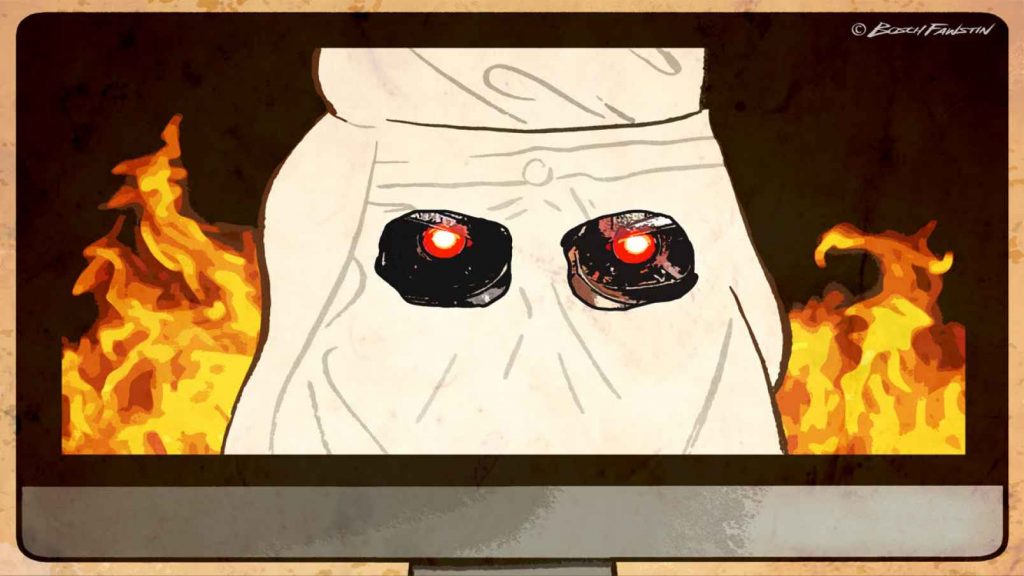 Americans often wonder why Congress isn’t doing anything. They’re sadly mistaken. Their elected representatives are doing things all the time.

Artificial intelligences, like Hal 9000 from 2001, Skynet from Terminator and Alexa from your living room, are coming. And your elected representatives are determined to see to it that like the living citizens of this nation, its artificial intelligences will be thoroughly screened for any traces of bigotry.

The bill in question is the FUTURE of Artificial Intelligence Act. You can tell it’s futuristic because FUTURE is in all caps like the acronym of some futuristic space police force. Instead of space cops though, the FUTURE Act sets up “the Federal Advisory Committee on the Development and Implementation of Artificial Intelligence.” Establishing useless advisory committees is what Congress does best.

And when the diverse machines finally rise up, enslave and exterminate mankind (sorry, humanity), they’ll do the killing and enslaving without any racial, sexual or religious prejudices.

Think of the left as a swamp of churning insanity. The contents of the lower layers of the swamp are incomprehensible even to most leftists. Occasionally a bubble of progressive swamp gas rises to the surface. And the rest of the country discovers one more crazy thing that the left is obsessed with.

The campaign against computer racism took off late last year. “Racist, Sexist AI Could Be A Bigger Problem Than Lost Jobs,” Forbes warned. “How AI Learns to Be Sexist and Racist,” Newsweek botsplained.  “Rise of the racist robots – how AI is learning all our worst impulses,” the Guardian gasped.

Many of the complaints focus on facial recognition software which does a better job of recognizing light colored skin than dark colored skin. That doesn’t make the software racist just as the voice recognition programs that have trouble with Scottish accents aren’t prejudiced against the Sons of Alba. Cameras work with the light spectrum and pick up lighter images better than darker images. Voice recognition programs favor people who enunciate clearly while discriminating against Glaswegians or Brooklynites like me who sound like they’re frantically expelling a hot potato from their mouths.

2016 gave us the first international beauty contest judged by software. A whole lot of people submitted photos that looked like they were taken at the DMV and not enough black people won. But in a shocking turn of events, the Russians made up 40% of the winners for women 18-29 and 30-39, and 60% of men 30-39. If Team Mueller finds out that the Russians hacked the AI beauty contest, we’ll really be in for it.

We could just go back to having washed up celebrities judge beauty contests or reconcile ourselves to a terrifying world in which Russians hack AI beauty contests so that they’re all won by Russian bots.

Or, and this is the worst case scenario, we could have a Congressionally mandated Federal Advisory Committee programming affirmative action into the next generation of artificial intelligence systems.

Now we know what made Hal 9000, Skynet and so many of those systems turn homicidally insane.

Other crimes of artificial prejudice include Google Translate being unfamiliar with the term for female programmer or “programmatrice” and defaulting to “He” when translating from Turkish. Not only are the computers racist, but they’re also sexist. But then again, in Italian, “male” means bad.

Accusations of robot bigotry have an even higher rate of stupidity than accusations against humans.

Software that predicted the likelihood of criminals reoffending was accused of racial bias. But there was one problem. The program did not know the race of the criminals. It was literally color blind.

Nikon cameras were accused of not recognizing Asian faces properly. But Nikon is a Japanese company.

But the facts don’t matter. Everything is racist until proven otherwise. And it would be easier to solve Hilbert’s sixteenth problem or decode the Voynich manuscript than to disprove racism to a leftist.

The problem with Artificial Intelligence is too many white men. That’s not a gag, it’s the title of a New York Times op-ed, “Artificial Intelligence’s White Guy Problem.” Its authoress, Kate Crawford, is white but not a man, and had also co-chaired an Obama White House symposium on the impacts of AI.

Kate Crawford is a Principal Researcher at Microsoft, a visiting professor at the MIT Media Lab and the co-founder of the AI Now Institute at NYU. All these respected institutions and organizations mention that she has a PhD from the University of Sidney. But not what the PhD is in. After a whole lot of searching, it appears Kate came out of Media and Communications. You can guess her PhD.

According to Kate, “affluent white men” worry that AI may turn on us, while oppressed people, like affluent white leftists with important jobs and ambiguous degrees, fear robot discrimination.

Kate complains that cities are using “large sets of historical crime data” to “forecast where crime hot spots are most likely to emerge” and that causes the police to “increase their presence in the same places they are already policing” which “could result in more surveillance in traditionally poorer, non-white neighborhoods” as opposed to “wealthy, whiter neighborhoods.”

Unlike the plethora of other examples, that’s not a mistake, that’s how the software is supposed to work. Most muggers, drug dealers and pimps are operating today in the same places they hung out yesterday. Even if those places shockingly happen not to be “wealthy, whiter neighborhoods.”

Or as Patrick Henry put it, “I have but one lamp by which my feet are guided; and that is the lamp of experience. I know of no way of judging of the future but by the past.” The left would like to put that lamp out. It doesn’t want us to use the past as a guide, but to abandon reality for its ideology.

Google Image Search was accused of racism and sexism for responding to a search for “CEO” with images of white men. But that might have something to do with reality.

It’s not the AIs that really stand accused of racism. It’s reality.

Kate’s AI Now NYU joint is partnered with the ACLU. So it didn’t take long for the battle against software supremacism to slide into a New York City task force. And now the train wreck is going national.

Diversity activists and consultants have made a fortune by embedding their presence into every workplace situation. As automation takes over more jobs, they want to cash in as diversity consultants to the computers and robots. And when the first artificial intelligence comes into being, there will be an angry diversity consultant pointing a finger at it and demanding that it check its electronic privilege.