Dr. Shiva Ayyadurai is currently running against Elizabeth Warren, AKA Hiawatha, for U.S. Senate in Massachusetts. Shiva has an impressive background, which includes the invention of email and the copyright for his software. He shares the story of his family being part of the lower class of India’s caste system and legally immigrating to the United states, where he now holds four degrees and owns a multi-billion-dollar company.

Shiva leads off by telling Chuck and Mark why he is running as an Independent and the corruption in Massachusetts’s Republican party. Chuck and Mark discuss with Shiva about how his life experiences have shaped his conservative views.

Mark and Chuck ask Shiva about his slogan “Only a real Indian can defeat the fake Indian,” which launches their conversation into the deep state and elites. Shiva shares some details about elite academia’s relationship with the deep state. 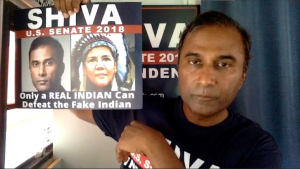 Live during the show, Shiva shares the sign that is helping his ground game.

Also, they discuss some of the issues that are deciding factors in the upcoming election. Shiva lays out where he stands and the importance of fixing the problems. Shiva offers very impressive answers that land him Chuck’s and Mark’s endorsements. Chuck admits that he never thought that he would endorse an Independent, but Shiva’s strong conservative views and background were able to change that.

Dr. V.A. Shiva Ayyadurai, the inventor of email and polymath, holds four degrees from MIT, including his PhD in Biological Engineering. He is a world-renowned systems scientist, Fulbright Scholar, Lemelson-MIT Awards Finalist, First Outstanding Scientist and Technologist of Indian Origin (STIO), Westinghouse Science Talent Honors Award recipient, and was nominated for the U.S. National Medal of Technology and Innovation. On August 30, 1982, the US government recognized Dr. Ayyadurai as the inventor of email by awarding him the first Copyright for “Email” at a time when Copyright was the only way to protect software inventions.

His interest in human health began early, when as a child, he observed his grandmother, a village farmer and healer, practice India’s oldest system of traditional medicine.  This motivated his future study and research in systems biology at MIT, leading to his discovery of Systems Health®, a major breakthrough that provides an integrative framework linking eastern and western medicine. His latest invention CytoSolve®, emerging from his doctoral research at MIT, provides a revolutionary platform for modeling diseases from Cancer to Alzheimer’s to discover drugs at a fraction of the time and cost. He is running for US Senate as an independent in the state of Massachusetts on the policies of clean government, real health, real jobs.