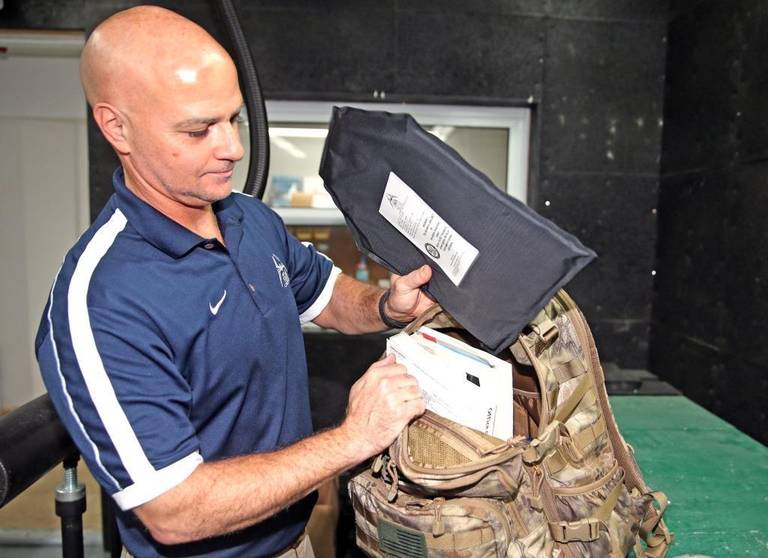 In the arsenal of school-sponsored security measures, metal detectors, ID checks and security cameras are practically second nature. A bullet resistant backpack insert? Not so much.

At Florida Christian School, a private, nondenominational Miami-Dade school serving students from preschool to high school, that could be changing. The school has started offering parents the opportunity to buy a $120 piece of ballistic armor to turn students’ backpacks into potential lifesavers.

“It’s just a tool,” said George Gulla, the school’s head of security. “I’d rather be prepared for the worst than be stuck after saying ‘Wow, I wish we would’ve done that.’”

Gulla, 55, started his job in the shadow of the 2012 shooting at Sandy Hook Elementary School, where a gunman killed 20 first-graders and six staff members before turning the gun on himself. Gulla used his 27 years of law enforcement experience to come up with new security measures to soothe anxious parents, including sound-enabled surveillance cameras, uniformed security guards patrolling campus and active shooter drills.

In those drills, students are taught to wear their backpacks on their chests and hold them close.

“We want to protect our students’ center mass,” Gulla explained.

Last year, Gulla was running through the drill with parents. One in particular, Alex Cejas, was intrigued. Cejas founded and runs Applied Fiber Concepts, a Hialeah-based body armor company. When his two kids, now age 11 and 13, started school he slipped one of the soft armor plates he makes into their backpacks.

At just under a pound, the slim black inserts were low impact on Cejas’ kids’ shoulders but a big weight off his.

“While books and stuff in your backpack may stop a bullet, they’re not designed to,” Cejas said. “I wouldn’t bet my life on it.”

After a few rounds of conversation, Cejas agreed to set the school up with a custom order in case parents were interested. The binder-sized piece of armor is built to withstand bullets like a .44 Magnum and a .357 SIG but not from rifles, which would require a bulkier and heavier chunk of armor.

“We thought, yeah, let’s offer it to anyone who wants it,” Gulla said. “It’s not required. But if it gives you extra peace of mind…”

The reaction has been mostly positive, he said, save a few parents who called him to reminisce over “a different time, a different world,” when no one thought body armor was as necessary in a backpack as a brown bag lunch.

The concept isn’t unusual nowadays. Bullet resistant products have been on the market for decades, with new ones popping up after each high-profile mass shooting. Cejas, who’s been in the industry for 25 years, said he saw a wave of profiteers in the bullet resistant school supply industry after the Columbine shooting in 1999, where two high school students shot and killed 11 of their peers.

Worried parents can buy “bulletproof” binder inserts, tablet cases and even backpacks. And they have. After Sandy Hook, the founder of popular body armor company Bullet Blocker told Marketplace sales rose from 20 backpacks a week to around 10,000.

What’s different about these backpack inserts is the partnership with the school. They’re not bought by the school, like the bulletproof whiteboards a Minnesota school board purchased for their district, but parents can print their order form off the Florida Christian’s website and send it to school with their kids.

Trump, who’s openly dismissive of the utility of bullet resistant products, said he has served as an expert witness in dozens of cases on school security where students are hurt or killed. The common thread, he said, is never a failure in gear or technology – it’s a failure in people or procedures.

He worries that schools that focus on active shooter training have “tunnel vision” and don’t train as well for the more mundane security risks at schools, like a stranger picking up a student without permission.

“You’re bypassing grade school and jumping straight to grad school before you mastered the basics,” he said.

Although Florida Christian has never had a gun incident – “and I pray to God we never have one” – Gulla said he sees the active shooter training and precautions as one small part of a much larger security puzzle.