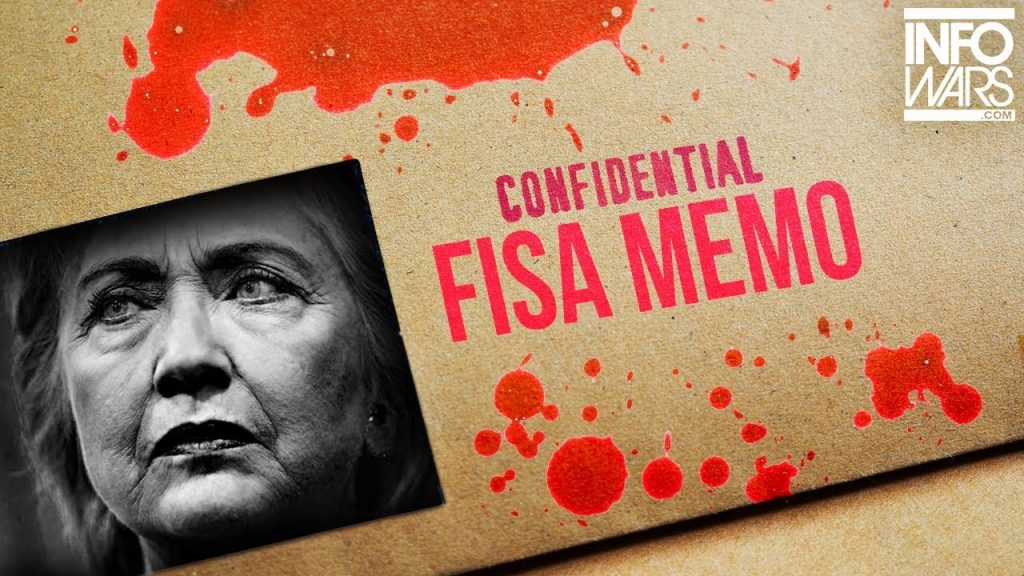 Democrats and the media have spent the entire week shrieking desperately that releasing the memo will reveal classified information and get people killed.

The memo has been released. And the only thing it kills is reputations as it documents how partisan figures in the FBI and the DOJ blatantly abused their authority and legitimized the Steele dossier.

Here are the 4 most devastating revelations from the memo release.

1. The FISA eavesdropping application for a Trump associate relied on the Steele dossier but never mentioned that it came from the Clinton campaign… even “though the political origins of the Steele dossier were then known to senior DOJ and FBI officials.”

The application to the FISA court failed to mention that the Steele dossier was opposition research from a man being paid by a political campaign. The application, which was signed by Comey (who is still posturing on Twitter), Sally Yates (who is playing the martyr from afar), Andrew McCabe (who was forced to leave for allegedly sitting on the Weiner laptop emails)  and Rod Rosenstein, (who is still around,) misled the FISA court in this very fundamental matter.

…but then the FISA application gets even worse

Obama Inc. had a nasty habit of using the media to create these echo chambers in which leaks reinforced administration narratives. But this is a case where Obama officials bolstered their case with a Clinton campaign hit piece that was based on its own opposition research.

And if the name Isikoff sounds familiar, he was the guy who had the Lewinsky story. And Newsweek killed it.

The FISA application lied and pretended that the echo and the echo chamber were two separate things.

“The Page FISA application incorrectly assesses that Steele did not directly provide information to Yahoo News. Steele has admitted in British court filings that he met with Yahoo News—and several other outlets—in September 2016 at the direction of Fusion GPS. Perkins Coie was aware of Steele’s initial media contacts because they hosted at least one meeting in Washington D.C. in 2016 with Steele and Fusion GPS where this matter was discussed.”

Perkins Coie was acting on behalf of the Clinton campaign.

3. Steele made no secret of his partisan agenda.

“In September 2016, Steele admitted to Ohr his feelings against then-candidate Trump when Steele said he “was desperate that Donald Trump not get elected and was passionate about him not being president.” This clear evidence of Steele’s bias was recorded by Ohr at the time and subsequently in official FBI files—but not reflected in any of the Page FISA applications.”

Not surprising since Ohr’s wife was working for Fusion GPS to go after Trump. And Ohr had met with her boss.

So not only was the FISA application relying on Clinton opposition research, but its purported author, was open about wanting to stop Trump.

4. The Clinton dossier was unverified. Comey had admitted as much. Yet he signed off on using it anyway.

“According to the head of the FBI’s counterintelligence division, Assistant Director Bill Priestap, corroboration of the Steele dossier was in its “infancy” at the time of the initial Page FISA application. After Steele was terminated, a source validation report conducted by an independent unit within FBI assessed Steele’s reporting as only minimally corroborated. Yet, in early January 2017, Director Comey briefed President-elect Trump on a summary of the Steele dossier, even though it was—according to his June 2017 testimony—“salacious and unverified.”

So the FISA warrant was based on information that Assistant Director Bill Priestap admitted was unverified and that FBI Director Comey had also called… “unverified”.

That means that even setting aside the tainted partisan origins of Clinton’s Steele dossier, it was bad material that should never have been used. Yet it was.

5. Without a work product of the Clinton campaign, surveillance would have been impossible.

“Deputy Director McCabe testified before the Committee in December 2017 that no surveillance warrant would have been sought from the FISC without the Steele dossier information.”

So unverified opposition research from the Clinton campaign was used to target the Trump campaign with a misleading and false FISA application.

And this is just the beginning. We’re nowhere near the end of this scandal. Remember, it ends with top Obama officials engaging in mass unmasking of Trump officials. It ends with grotesque political abuses of surveillance by Susan Rice and Samantha Power, among others. This memo is not where the scandal ends. It casts a little light on how it began.