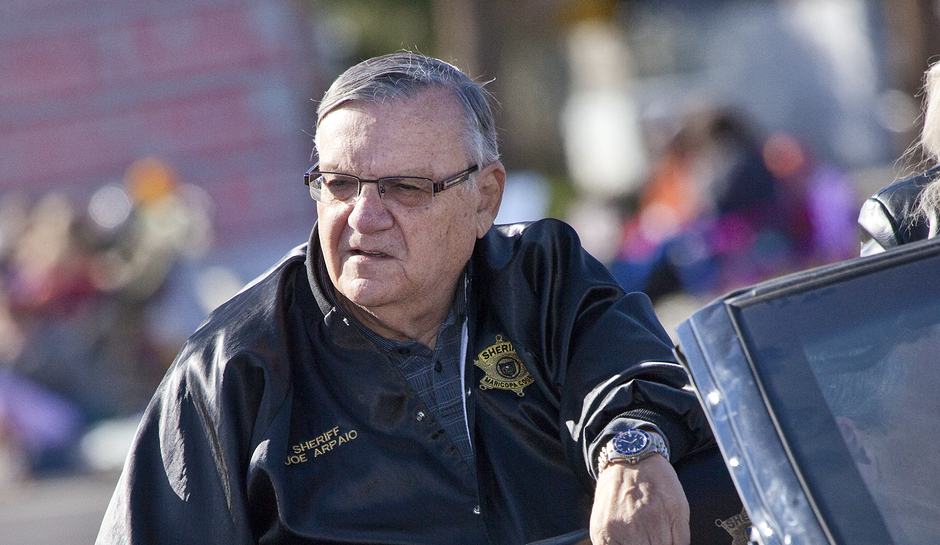 There was speculation heading into President Trump’s speech in Phoenix, AZ on Tuesday that he would pardon former Maricopa County Sheriff Joe Arpaio, who has been a staunch supporter of the president. It didn’t happen, but Trump seemed to indicate that the pardon would happen eventually.

“He’s going to be just fine,” Trump said about Arpaio, adding that he didn’t want to do the pardon that night because he wanted to avoid “any controversy.”

Here are five things you need to know about a possible Arpaio pardon.

1. Arpaio was convicted for violating a court order that required him to stop racial profiling. A federal judge, Murray Snow, issued an injunction in 2011 mandating Arpaio’s office to cease targeting Hispanics and detaining immigrants for simply being in the country illegally. According to the judge, Arpaio’s office continued the practice for a year and a half. Arpaio claimed that violating the court order was unintentional because the order was vague, but Snow didn’t buy his defense, as she wrote that Arpaio “willfully violated the order by failing to do anything to ensure his subordinates’ compliance and by directing them to continue to detain persons for whom no criminal charges could be filed.”

Arpaio’s defenders are claiming that he is being targeted over politics and that he simply was enforcing the law. However, Ed Morrissey of Hot Air noted that there is an argument to be made for Arpaio not receiving pardon:

The best argument would be that Arpaio refused to abide by a lawful order of a court, and was correctly convicted of contempt for it. As a servant of the law, Arpaio has to abide by it too, and it sets a dangerous precedent to let a law-enforcement leader off the hook for defying the law. Arpaio’s supporters claim his long track record in serving the US as the mitigating factor for the pardon, but that’s true of any law-enforcement leader. Enforcing the law means recognizing lawful authority, even when one disagrees with a court.

Arpaio’s sentencing is set to occur in October. He could face a maximum of six months in jail.

2. There are disputing reports about the Trump administration readying a pardon. According to CNN, the administration “has prepared the paperwork” for the pardon to occur, utilizing the defense that Arpaio was only “enforcing the law.” However CBS News is disputing that report, as their sources are stating that Trump is being advised by the White House legal team to wait until after Arpaio’s sentencing for the pardon. The White House legal team believes that Arpaio’s sentence could end up being “lenient,” rendering a pardon unnecessary.

3. It’s possible that Trump could issue the pardon on Twitter. Huffington Post Justice Reporter Ryan Reilly has pointed out that pardon statements can be short and can be written under any format, including Twitter. It might require Trump to make numerous tweets about it, but given Trump’s penchant for causing a firestorm with his tweets it shouldn’t be a surprise if Trump decides to issue the pardon via Twitter.

4. The majority of people in Arizona don’t think that Arpaio should be pardoned. A survey conducted by OH Predictive Insights found that 50% of Arizonans are opposed to the pardon, while 21% are in favor of it. An additional 29% weren’t sure.

The support for Arpaio’s pardon is particularly bad among those at the age of 54 or younger, as only 15% of those in that category support the pardon.

5. Sen. Kamala Harris (D-CA) made a particularly idiotic argument against Arpaio’s pardon. Harris, who has been dubbed “the Senate’s Moron-in-Chief” by Elliott Hamilton, tweeted that “Arpaio was convicted because he committed a crime,” therefore he should not be pardoned.

Morrissey took Harris to task over this argument:

The most disturbing part of this tweet isn’t the fact that Harris seems to have missed the fact that people who haven’t been convicted of a crime don’t need a pardon at all. It’s not even that she served as Attorney General in California before being elected to the US Senate. It’s that seven times more people liked this than commented on it, but at least many of the comments pointed out the obvious fallacy of Harris’ argument.

A senator should understand that clemency involves mainly those who have transgressed, not those who have not. An Attorney General in any state would have been involved in those decisions, which raises questions as to just how engaged Harris was in her six years serving in that role for California. It’s not as if it never came up; Jerry Brown has been famously generous with pardons, issuing them by the dozens for holidays such as Easter or Christmas during Harris’ tenure. Did she object to Brown issuing pardons to convicts then?