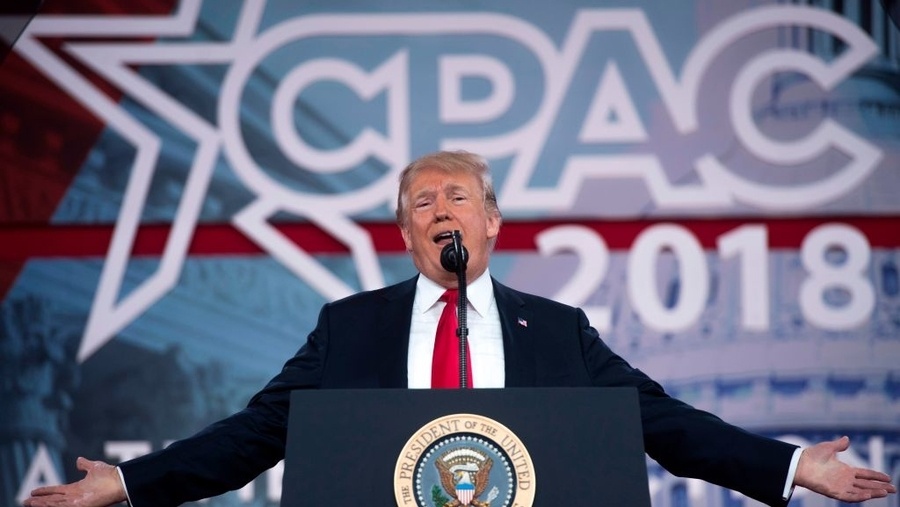 Here are five of the president’s key topics at the nation’s largest annual convergence of conservatives.

1. Proof of His Conservatism

At the 2016 CPAC, Trump didn’t speak. But talk of his candidacy and conservative credentials faced skepticism from the crowd that year.

“Remember when people used to ask, ‘Do you think he’s really a conservative?’ Well, I think that I’ve proved I’m a conservative,” Trump said.

As evidence, Trump cited passage of the Tax Cuts and Jobs Act, appointment of a record number of federal appeals judges (including Supreme Court Justice Neil Gorsuch), and recognition of Jerusalem as the capital of Israel.

“My administration has had the most successful first year in the history of the presidency,” Trump boasted.

“I mean judges, regulations, everything. The beautiful thing about the tax cuts is nobody thought we could get it.”

2. Protecting Schools and the Second Amendment

On the issue of guns, after the Feb. 14 school massacre that left 17 dead in Parkland, Florida, the president criticized by name the deputy sheriff assigned to the school. The law enforcement officer recently admitted to not entering the building and attempting the stop the 19-year-old gunman.

“You had one guard, he didn’t turn out to be too good”
in stopping the gunman’s rampage at Marjory Stoneman Douglas High School, Trump said. “He was not a credit to law enforcement, that I can tell you.”

The president said that failure is one more reason to allow “concealed carry” permits for teachers who are trained and skilled with firearms, such as former military or law enforcement personnel.

“Why do we protect airports, banks, government buildings, but not our schools? It’s time to make our schools a much harder topic for attackers. We don’t want them in our schools,” Trump said to applause. “When we declare our schools to be gun-free zones, it just puts our students in more danger–well-trained, gun-adept teachers and coaches should be able to carry concealed firearms.”

If authorized faculty could have used a gun when the shooter opened fire, he said, “a teacher would have shot the hell out of him before he knew what happened.”

“They love those students,” the president said of teachers.

Trump stressed he wasn’t talking about arming most teachers, but rather the likely 10 percent or 20 percent who are skilled.

“This week, I had the honor of meeting with students from Marjory Stoneman Douglas High School, with families who have lost their children in prior shootings–great families, great people–and with members of the local community in Washington, D.C.,” Trump said of “listening sessions” he conducted on two consecutive days.

“Our whole nation was moved by their strength and courage,” he said.

Trump called for a larger focus on mental health, and for strengthening background checks for gun purchasers. He also noted that his Justice Department has increased prosecution of gun crimes.

“It’s not do you love guns, do you hate guns. It’s common sense,” Trump said.

The president paid tribute to the Rev. Billy Graham, the celebrated pastor and evangelist who died Wednesday at 99.

“In America, we don’t worship government, we worship God,” Trump said to applause.

“We will never forget the historic crowds, the voice, the energy, and the profound faith of a preacher named Billy Graham.”

“Today I am announcing that we are launching the largest-ever set of new sanctions on the North Korean regime,” Trump said.

It marks the administration’s most recent round of sanctions on the communist regime. It also comes after North Korea’s “charm offensive” at the Winter Olympics, where North Korean dictator Kim Jong Un’s sister, Kim Yo Jong, got much positive media attention.

“The Treasury Department will soon be taking new action to further cut off sources of revenue and fuel that the regime uses to fund its nuclear program and sustain its military by targeting 56 vessels, shipping companies, and trade businesses that are assisting North Korea in evading sanctions,” Trump said.

“A strong nation has strong borders,” he said, then delivered a big applause line: “Don’t worry, you’re getting the wall.”

Trump also recited the words of “The Snake,” a 1968 song by Al Wilson, as a metaphor for immigration. It was an often-repeated line the president used from the campaign.

Trump has pushed Congress for a merit-based system of legal immigration, ending certain lotteries and chain migration for family members as part of a compromise to grant amnesty to hundreds of thousands of illegal immigrants brought to the country as minors.