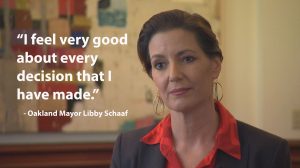 Authorities claim 800 criminals may have escaped because of Schaaf’s actions.

“She intentionally put law enforcement officers at risk. Being a law enforcement officer is dangerous enough. But to give criminals a head’s up we’re coming next 24 hours, increases the risk.” He continued that “there are 800 we were unable to locate because of that warning. That community is a lot less safe than it would have been.” […]