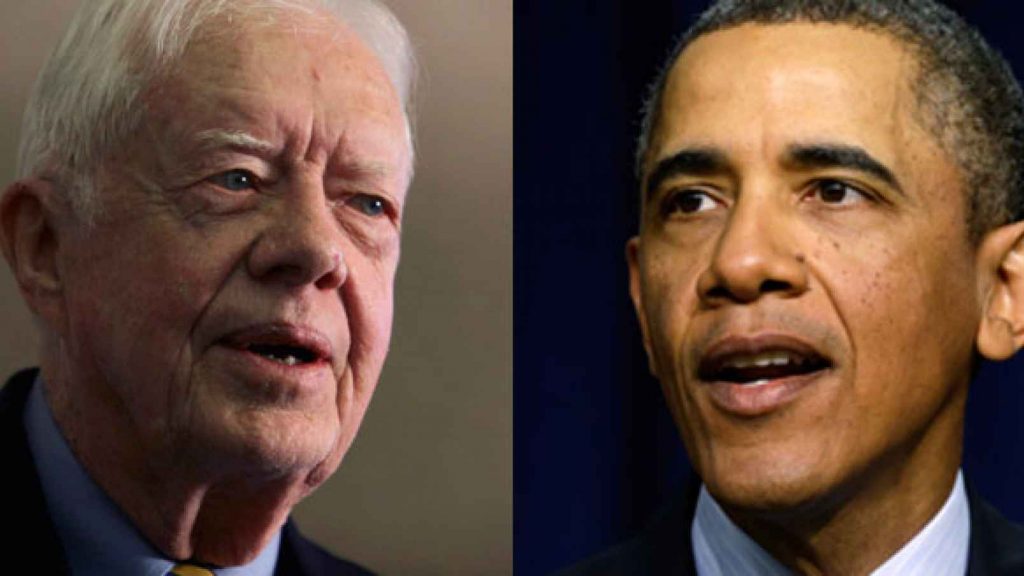 Where is the punishment of the Mullahs for the American blood they have shed?

The mullocracy in Iran is bragging that it has crushed the demonstrations against the regime that broke out on December 28. Regime change from within still remains a forlorn hope, as the theocratic police state has employed its usual brutal violence and intimidation to deny the protestors any momentum. Burning identification cards and electrical bills seem the last recourse for those brave Iranians abandoned by the so-called “global community” that averts its gaze from the destruction of human rights it pretends to worship.

So it goes in the 40-year history of bungling, indifference, greed, appeasement, and sheer stupidity that have defined the West’s response to the most consequential jihadist movement in modern times. A lot of blood has stained a lot of different guilty hands.

Start with Jimmy Carter and our terminally blinkered state department. Carter’s foreign policy team completely misinterpreted the Iranian revolution of 1979. Trapped in the fossilized narrative of anticolonialist resistance, nationalist self-determination, and hunger for human and political rights, our foreign policy savants missed the profoundly religious motives of the resistance to the Shah. The clerical class and the revolution’s godfather, the Ayatollah Khomeini, were driven by hatred of the modernizing, anti-Islamic program of the Shah and his father, such as the relaxation of sharia laws governing women, popular culture, and religious minorities, a program that Khomeini called the “abolition of the laws of Islam” and an existential threat to Islam itself. And they were particularly angered at the subsequent weakening of the clerics’ power and authority over social, private, and political life.

Indeed, the revolution was in fact a classic jihad against those modernizing “apostate” Muslim leaders who whored after Western “idols,” a dynamic that polluted the purity of the faith with anti-Koranic “innovations” derived from infidel culture. A cursory knowledge of Islamic history could have shown our analysts that such violent conflicts have consistently characterized Islamic history and its clash with Muslim traitors influenced by Christian rivals, from the Kharajites of the 7th century to the Wahhabis of the 18th to the Muslim Brothers of the 20th and to al Qaeda and ISIS of the 21st. Instead, we reacted in terms of our modern Western models of the inevitable progress of human rights, secularism, economic development, and political self-determination. We assumed that after the revolution, liberals, leftists, and technocrats would take over and start creating a Western-style state and integrating it into the global community on the basis of “shared interests” and “mutual respect.”

But as Khomeini said, Islam is the “religion of blood for the infidels” and a “sword for crushing the traitors” who promote alien “innovations.” The goal of the revolution was not a Western nation-state that improves its people’s economic and political conditions––“We did not start a revolution to lower the price of melons,” Khomeini made clear. Nor was integration with the postwar international system a goal, a point Khomeini made clear when he authorized the seizure of the American Embassy in Tehran and the taking hostage of its personnel, graphically demonstrating his contempt for that system and its diplomatic protocols. Rather, the destiny of Islam is to fight the world “until all men say there is no god but Allah.” Hence the creation of the Islamic Republic of Iran was just the beginning. “We shall export our revolution to the whole world,” Khomeini promised, a pledge his successors have kept for forty years.

Iran’s next repudiation of international norms and America’s power came in the 1983 Marine barracks bombing in Beirut, at that time the largest terrorist attack against America in history. This murder of 241 U.S. troops was carried out by jihadist groups created, trained, and funded by Iran. It was an attack in Iran’s already declared war against the U.S., the “Great Satan” and infidel global hegemon standing in the way of Islam’s divinely sanctioned triumph. But still not grasping the context of the struggle, we did not retaliate against the jihadists, not even bombing the Beqaa Valley––the “Little Tehran” where Iran’s proxies were encamped, trained, and operated with impunity. Just as Jimmy Carter did not retaliate for the embassy seizure, the Reagan administration pulled out of Lebanon, demonstrating to the proliferating jihadist groups already inspired by Iran’s success that we were a “weak horse” too in love with our godless lives of pleasure and consumption to defend ourselves and our beliefs.

Also on Reagan’s watch took place the Iran-Contra affair of 1985-86, a plan to arm the Contras fighting the communist Sandinistas in Nicaragua, and to ransom Americans held hostage by Iranian jihadist proxies in Beirut, by selling advanced weapons to Iran, both actions violating arms embargoes. This cock-eyed plan was also seen as a way to woo the mullahs from the Soviet Union: American emissaries brought to Iran a cake in the shape of a key, apparently a metaphor for “unlocking” the impediments to Iranian-American friendship. Once more our foreign policy gurus didn’t get the real nature of the Islamic Republic, which had already demonstrated its contempt for diplomatic outreach and the norms of international relations, using both only to extract concessions as it pursued its jihadist policy. The Reagan foreign policy team had not, as Khomeini said about Jimmy Carter after his disastrous attempt to rescue the embassy hostages, understood “what kind of people [they are] facing and what school of thought [they are] playing with. Our people is the people of blood and our school the school of jihad.”

Despite this long record of Iran’s jihadist nature and intentions, administrations from both parties have continued to do little to punish the mullahs for the American blood they have shed. Thousands of Americans have been killed in Iraq and Afghanistan by munitions and weapons provided by Iran, and by jihadists financed, trained, and transported by Iran. Evidence of Iran’s nuclear ambitions has led only to endless diplomacy, weak sanctions, and cringing “outreach” manipulated by Iran, which has followed the North Korea playbook to extract concessions by making empty promises.

Yes, the Cold War and the need to respond to the 9/11 attacks dominated our attention. But there were no such excuses for Barack Obama and his disastrous agreement that if not abandoned, will lead to a nuclear-armed Iran in less than a decade. Despite Iran’s long track record of double-dealing and “weaponizing” negotiations, as a Johnson advisor said of the North Vietnamese, Obama gave the world’s foremost state sponsor of terror $1.5 billion and virtual carte blanche to develop nuclear-tipped missiles. Obama’s alleged reasons were to encourage Iran to join the family of nations, improve its economy, and normalize its aggressive foreign policy, preposterous goals for anyone aware of Iran’s history as a jihadist state, or even cognizant of Islam’s consistent 14 centuries of doctrine and aggression. This stubborn refusal to accept the futility of changing such a state’s behavior through negotiation, “outreach,” flattery, and bribes reveals how deeply engrained such blindness is in our institutional received wisdom.

Of course, grubbier motives also lie behind this feckless policy. Diplomatic negotiation is a politically convenient smokescreen for politicians and citizens who do not want to take the risk and pay the price of using force to change state behavior, but who still need to pretend that something is being done. Economic sanctions if severe enough could be helpful, but governments and international businessmen, who operate on the ancient precept that money doesn’t stink, fret at losing access to markets, resources, and investment opportunities. Reimposing meaningful sanctions on Iran will face pushback from the companies that have rushed in to do business with the mullahs after Obama’s deal ended the sanctions.

So we’re left with a Micawber foreign policy: waiting for something to turn up. A lot of the enthusiastic commentary about the recent protests has reflected this hope that the oppressed Iranian people will solve the problem by ending the theocracy. But without much more substantial aid to the opposition, and much more significant pressure on the theocrats, that outcome is unlikely. Nor can we wait for Iran’s manifest weaknesses––endemic corruption, brutal oppression, a failing economy, and a demographic death-spiral––to do our work for us. As Adam Smith said, there is a lot of ruin in a nation, even a dysfunctional one. And such a state can wreak immense damage on its way to Gotterdammerung. The Thousand Year Reich lasted only twelve, but it took at least 50 million lives with it.

Do we really want to roll the dice on Iran collapsing before it acquires nuclear weapons and thus enjoys the immunity that North Korea has? That outcome will mean more blood on more hands, including our own.