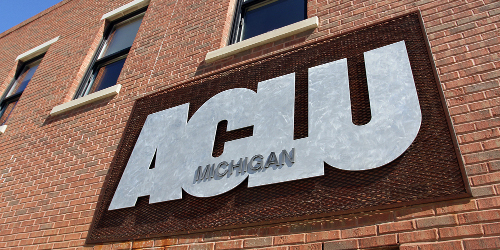 The ACLU just launched the latest campaign in its crusade to undermine American values and patriotism.

Earlier this month, at Garden City Community College in Southwest Kansas, basketball player Rasool Samir was cut from the team. And the ACLU has used the episode to launch a new litigation phase of the national anthem saga.

The circumstances of the incident were as follows. The Garden City Community College basketball team did their normal pregame warm-up shooting, after which the team retired to the locker room for their final meeting before the game. During this routine meeting of the team, the national anthem would be sung on the court, and other pregame announcements would occur while the team was in the locker room. However, this time, Samir decided to remain alone on the court and shoot baskets while the audience was singing the national anthem.

Not surprisingly, audience members were unhappy about this display, including one fan who engaged in an altercation with Samir. When the head coach heard about Samir’s behavior, he asked Samir (who was injured and listed as a medical red shirt and unable to play anyway) to leave the gymnasium. Samir then disobeyed the head coach, followed the team onto the court, shouted profanities at the anit amercoach, and threatened to fight him. The next day, the head coach dismissed Samir from the basketball team for “his disrespectful and aggressive conduct towards” the coach. Unable to play basketball, Samir then left the community college at his own request.

Enter the ACLU. A week after the incident, the ACLU sent the community college’s athletic director a threat letter suggesting that the college had violated Samir’s First Amendment right to freely exercise his religion. Such letters from the ACLU often end up being the first volley in a lawsuit. According to the ACLU, “Samir was engaged in protected First Amendment activity when he declined to observe the national anthem. … Samir’s objection was motivated by his religious beliefs and thus, was protected on free exercise grounds.”

Samir is a Muslim.

For the ACLU, it’s a perfect case – they get to fight against the Star Spangled Banner and fight for Islam. Perfect, that is, except for the fact that the ACLU’s claims are nonsense. Is the ACLU really arguing that Samir was “motivated by his religious beliefs” to leave his teammates and shoot baskets on the court? Since when is shooting hoops part of expressing one’s Muslim faith?

But for the ACLU, the facts don’t matter. This incident offers them an opportunity to equate the ceremonial standing for the national anthem with religious intolerance. And that fits perfectly into their agenda.