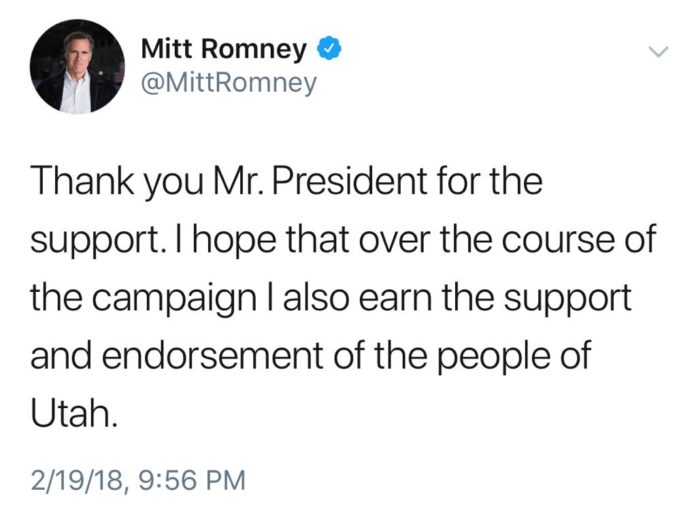 Former Governor of Massachusetts, Mitt Romney, who is running for U.S. Senate in Utah has received the endorsement of President Donald Trump.

.@MittRomney has announced he is running for the Senate from the wonderful State of Utah. He will make a great Senator and worthy successor to @OrrinHatch, and has my full support and endorsement!

In his Tweet thanking the President, Romney wouldn’t even say his name, and instead thanked “Mr. President.”

Thank you Mr. President for the support. I hope that over the course of the campaign I also earn the support and endorsement of the people of Utah.

This endorsement from President Trump is extremely surprising. Romney and Trump have not had a very cordial past, with Romney insulting the President just last month.

The poverty of an aspiring immigrant’s nation of origin is as irrelevant as their race. The sentiment attributed to POTUS is inconsistent w/ America’s history and antithetical to American values. May our memory of Dr. King buoy our hope for unity, greatness, & “charity for all.”

Romney and Trump insulting eachother isn’t anything new. Romney has, up until he decided to run for U.S. Senate apparently, been a never Trumper for years. During the 2016 Presidential election, Romney even stated that he would not have accepted Trump’s endorsement when he ran for President in 2012 if he had said the same things he says today about the KKK, which Trump has continuously denounced. (I didn’t realize Mitt Romney was so opposed to denouncing the KKK.)

If Trump had said 4 years ago the things he says today about the KKK, Muslims, Mexicans, disabled, I would NOT have accepted his endorsement

“I watched this poor, sad Mitt Romney this morning,” Trump said. “I don’t think he knows what misogynist is, he suffers from — and he’s sitting like a real stiff. Don’t forget this guy let us down, folks, he choked and he let us down. The guy’s a stone cold loser. He choked, and when you’re a choker, you can never get a choker a second chance, it’s too important. A choker is a choker, you see it in sports. You see it in sports, folks. When the guy misses the kick you get rid of him, you get another one in there.”

On Twitter, Trump made insulting Romney a regular occurrence:

Mitt Romney,who totally blew an election that should have been won and whose tax returns made him look like a fool, is now playing tough guy

Mitt Romney, who was one of the dumbest and worst candidates in the history of Republican politics, is now pushing me on tax returns. Dope!

Why did Mitt Romney BEG me for my endorsement four years ago?