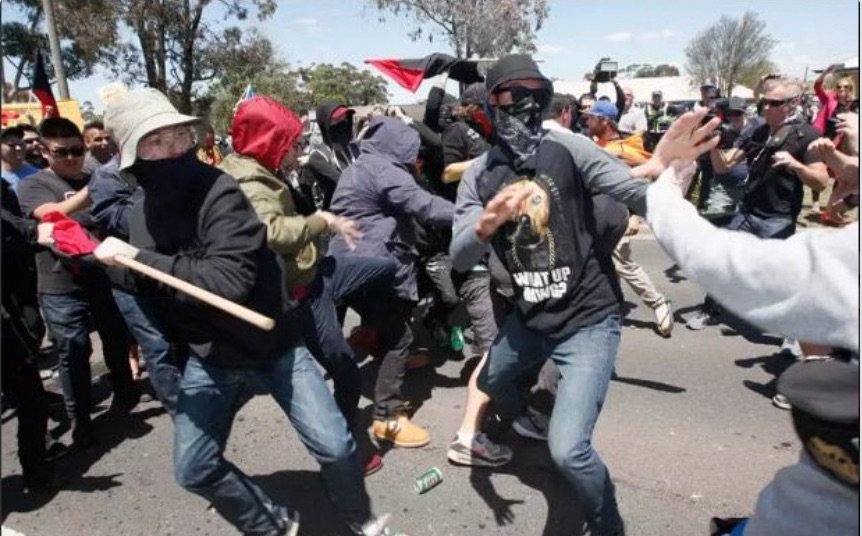 This past weekend CNN drew more criticism for its left-wing bias after posting a profile on the violent left-wing group “Antifa,” that rather generously described the communist group as “seeking peace through violence.” Despite the obvious contradiction in terms, at least the headline noted the group’s violent motives (albeit in a really stupid way.) But that phrase was scrubbed just hours later by CNN in an apparent move to not offend members of the radical-left group.

The original article appeared online Friday afternoon, with the headline: “Unmasking the Leftist Antifa Movement: Activists Seek Peace Through Violence.” That one mention of violence in the headline was the only real objective criticism CNN’s Sara Ganim and Chris Welch had to offer throughout their lengthy piece, interviewing several self-identified Antifa activists.

The group’s radical ideologies were downplayed in the sympathetic piece. Activists were given a direct line to explain their goals and beliefs, without fear of any criticism from CNN, in passages like these:

Antifa activists, who operate without any centralized leadership, told CNN that their goal is peace and inclusivity. They often denounce capitalism and government. Since Trump entered the world stage, they’ve condemned his push to tighten immigration rules and what some view as his tendency toward racism.

On social media, many of the arrestees have posted anti-police messages and anarchist views. Some write that they feel disenfranchised in the current political climate, the CNN review found.

If this was a radical, violent right-wing group, it’s a given that CNN would have plenty of left-wing groups on hand to denounce their ideologies and behavior. When the group’s violent methods were finally first brought up in the article, CNN justifies the violence as a means to an end, because, the antifa members say, they’re committing violence to “eradicate hatred.” Well, if you put it that way, it all makes sense!

To make matters worse, CNN even tries to spin the group as some kind of modern day patriots, (even as the antifa activists who showed up in Boston protesting free speech this past Saturday refuse to accept that label.)

Let's get one thing clear. Antifa is an Anarcho-Communist cause. Those on the left who call us "patriots", step the FUCK away. #BostonResist pic.twitter.com/fXV3mgK45j

The article emphasizes how the group works outside of “party structures,” and operated as a sort of grassroots response to Donald Trump. CNN even quotes one Antifa activist as “echoing the words of John Adams:”

“We cover our face because the Nazis will try to find out who we are. And that is a very bad thing because they harass people,” he said. “We’re trying to stop them from organizing. … When they organize, they kill people, they hurt people, they fight people. And we’re the ones who are fighting back.”

It’s a position taken by many Antifa activists: “This is self-defense.”

Antifa activists often don’t hesitate to destroy property, which many see as the incarnation of unfair wealth distribution.

Crow explained the ideology this way: “Don’t confuse legality and morality. Laws are made of governments, not of men,” echoing the words of John Adams.

On top of that, nowhere in the entire piece does CNN mention the movement’s radical message of censoring free speech, a concept in direct contradiction with our First Amendment.

The article drew renewed attention after conservative outlets and journalists noticed the changed headline on Saturday, which removed the “peace through violence” phrase.

While there is no direct evidence that CNN changed the headline due to pressure from Antifa, the editor’s note at the bottom of the article clearly says the story and headline was “updated to clarify” that the “counterprotesters say they were not to blame for the violence at Charlottesville:”

Editor’s note: This story has been updated to clarify that counterprotesters say they are not to blame for violence at the Charlottesville protest. The story’s headline has also been updated.
That certainly sounds like the network was pressured to present the violent group in a more positive light