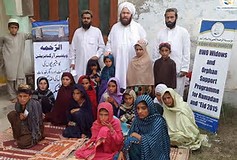 The Afghan government is funding schools and hospitals run by the Taliban as the militant group seeks to establish itself as a legitimate administration in large swathes of the country, a new film has found.

A report by a BBC team granted rare access to the group’s stronghold in Helmand province found the Taliban has been forced to present itself as somewhat modernized since Afghans have grown used to government services and a different way of life after the group was ousted from official power.

The Taliban has grown in confidence three years since Western troops withdrew from the country.

“They are trying to set up a mini-state – if not the actual state – in Helmand,” Auliya Atrafi, a journalist from the BBC Afghan service who made the film, told the Telegraph.

“In the evening when we sat with the elders and the local leaders, they asked us: ‘Where do you think we will be in 10 years time?’ We knew what they were thinking. They see themselves in ten years time as the government.”

The Taliban swept to power in 1996, ending a brutal civil war that followed the Soviet Union’s withdrawal from Afghanistan in 1989.

They imposed a harsh version of sharia law, including public executions and mutilations, forbidding women from taking part in public life, and banning television.

The group was overthrown by NATO intervention after the September 11 attacks in 2001, but have made gains since Western troops withdrew two years ago.

It now controls more than 80 percent of Helmand Province, where hundreds of British soldiers died fighting the group.

Mr Atrafi, a native of Helmand, spent more than a year negotiating access to Taliban-held areas.

He and his team were eventually allowed to spend four days under the watchful eyes of Taliban minders in Sangin and Musa Qala, the group’s defacto capital.

The team visited a boys’ school and a hospital funded and supplied by the central government in Kabul, but run by the Taliban.

A school administrator told the crew that the Taliban do not interfere with government school inspections and allow teachers to follow the national curriculum issued by the Kabul government.

However, a doctor at the hospital said the arrangement had “failed,” and that the dual system had left a vacuum of responsibility.

“I haven’t been paid in the past six months – not only me but also the entire staff of the hospital,” he said.

The team were also told not to film anything to do with the opium trade – a major industry in the region and has been used in the past by Taliban and non-Taliban warlords as a source of revenue.

However, the group appears to be flirting with modern technology as it struggles to build legitimacy.

“People have hidden television sets, we were told there are about 20 wifi spots even though mobile and internet communications are banned,” he said.

“These are the sorts of modernity that frightens the Taliban. But at the same time they realise  they cannot do without it, so for them it is a kind of to-be-or-not-to-be situation,” he added.

Sir William Patey, former UK Ambassador to Afghanistan said: “It doesn’t surprise me that there is a modus vivendi being struck up with the locals and the Kabul govt. All the time we were there we were trying to bring them into the process. If the Taliban are showing they may do that, it is not necessarily a bad thing.”
While the group has been forced to modernise, elements of Taliban’s puritanical rule remain in place.

Mr Atrafi and his team saw no women on the streets, mobile and internet communications are banned, and they spoke to a teenager who received 40 lashes for watching a Bollywood film.

An arms dealer selling ammunition at the local bazaar in Musa Qala said the price for Russian heavy machine bullets had fallen from 45 cents to just 15 cents per round – a reflection of the masses of weaponry that has flooded the market as the Taliban captured equipment from the Afghan National Army.