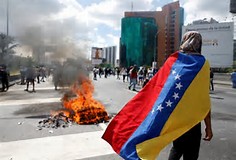 It was 10 a.m. and the newly promoted lieutenant was already sweating under his plastic face shield and black flak jacket.
A few days before, the 28-year-old who goes by the name of Catire had watched a national guardsman get his arm broken at a protest. A week earlier, a friend collapsed several paces from him on the riot line, shot through the groin. Catire pulled up his visor and chain-smoked by his motorcycle, hoping the day would pass quickly.

Several miles away on the other side of the city, tens of thousands of Venezuelans in white shirts and homemade gas masks gathered to march toward Catire and his unit, part of a bloody protest movement that has seen dozens of deaths in more than two months of turmoil.

Catire’s family suffers along with protesters who skip meals while watching their money become worthless. The lieutenant is unsure whether to blame the government or the opposition for the crisis. What he and other soldiers decide in the coming months could decide the country’s fate.

President Nicolas Maduro has greatly expanded the military’s authority and is leaning on the armed forces as his own grip on power weakens. The military has helped hold up the socialist administration for more than a decade, but never before was it the government’s main crutch. And despite the outward loyalty of top officers, cracks are beginning to appear.

In April, three lieutenants publicly rejected Maduro as commander in chief and sought asylum in Colombia. Another lieutenant in a restive western state cut up his official military ID card as supporters cheered. “Soldiers must not turn their arms on the people,” he said. Days later, he was in military prison.
“The country is unhappy with the situation right now, and the armed forces are no exception. The military has traditionally been on the right side of history here. If they turn, it’s all over for Maduro,” said Cliver Alcala, a retired general who participated in an unsuccessful 1992 coup led by a then-unknown junior officer named Hugo Chavez.

These days, Alcala is a vocal opponent of the socialist government installed by Chavez after he won election to the presidency in 1998. Despite counterintelligence and close surveillance in the barracks, Maduro is unlikely to know an uprising is brewing until it’s already upon him, Alcala said.
Any actual coup would cause an international crisis across a hemisphere profoundly scarred by the bloody military takeovers that marked much of the past century. But most opposition figures are hoping for much more passive support: for soldiers to hold back from attacks on protesters.

More than a dozen military officers were arrested during the first two weeks of the protests and thrown into a military prison on suspicion of rebellion, according to military documents provided to The Associated Press by a third party.

The government has pampered the armed forces as much as an economy in shambles will allow. Before Catire put on his green fatigues, knee-high boots and black body armor before the protest, he sat down to a breakfast of two corn cakes, beans, eggs and coffee with milk — more than many Venezuelans eat in a day.

He gets bonuses in dollars, and his status has allowed his relatives to cut the line for government-subsidized apartments, household appliances and cars. But those perks have not been enough to insulate military families from shortages and crime. In Caracas, Catire, whose name is local slang for blond, feels increasingly hemmed in. Like most other soldiers, he has been confined to barracks since the protests started at the end of March.

Opposition leaders have used social media to broadcast appeals to young soldiers killing time in the barracks. In one recent video, lawmaker Jose Manuel Olivares emphasized the potential consequences for soldiers who fire on protesters.

“Captains and lieutenants, we are the same age, we have the same dreams and expectations from life. But you are the ones carrying out orders to repress on the street while your bosses try to figure out how to preserve your special privileges. You’re the ones who risking prosecution,” Olivares said.

Like many leading politicians, the 31-year-old Olivares has been photographed multiple times stumbling away from blooms of tear gas at protests with blood streaming down his face.

The opposition has said it will hold officials to account for human rights violation and the message seems to be getting through. In 2014, the U.S. sanctioned officers involved in a far tamer crackdown on protesters. On a secret recording The Associated Press obtained last month, high-level military officers are heard debating the use of snipers against protesters, with some expressing concerns about possible prosecution should the opposition gain power. The recording’s authenticity could not be verified.

Catire has taken extra precautions since the day he saw a friend collapse next to him as his unit shot tear gas at protesters near an upscale eastern Caracas plaza. A bullet passed through his friend’s upper thigh and punctured his groin, causing rapid blood loss. A teenage protester was killed at the same plaza that afternoon, his chest crushed by a tear gas canister.

While the soldiers inflict more injuries than they receive, Catire is wary of protesters throwing gasoline bombs and rocks. Shots also often come from pro-government militias who ride into the scrum on motorcycles. At least two National Guard soldiers and two policemen have been killed in the protests.

Along with asking soldiers to break up demonstrations, Maduro relies on military tribunals to jail protesters and gives the armed forces a prominent role in his effort to rewrite the constitution. He has invited uniformed military members to appear at televised rallies since the protest movement started, and has promoted waves of officers to general.

Although he lacks the military background of Chavez, his late mentor, Maduro has been at pains to point out he shares soldiers’ working-class background and emphasize that he and many soldiers have browner skin while opposition leaders and elite Venezuelans in general look more European. In May, he appeared before a group of grim-faced young soldiers and told them opposition protesters had burned a bystander to death “just because he had dark skin like you and me.” Witnesses say the bystander was caught stealing.

Catire, who did not give his full name because he was violating protocol by speaking to a reporter, said he feels the country is descending into civil war. He grew up poor near the Colombian border, and joined the military because he liked the idea of bringing order to a chaotic country. He disapproves of the opposition calling on the armed forces to pick a side and believes the military must stay neutral and wait for elections.
By noon on the day of the protest, he and other soldiers were turning back the crowd with tear gas and water cannons.

Toward the day’s end, a group of women approached Catire’s post and shouted, “Lay down your arms and join us!” Some stripped naked and threw their clothes over the 12-foot barricade the soldiers had set up. But the young men stayed immobile and silent. “Take down this wall,” the women insisted.
After a few more hours, both sides went home to cool down and prepare to repeat the whole process the next morning.