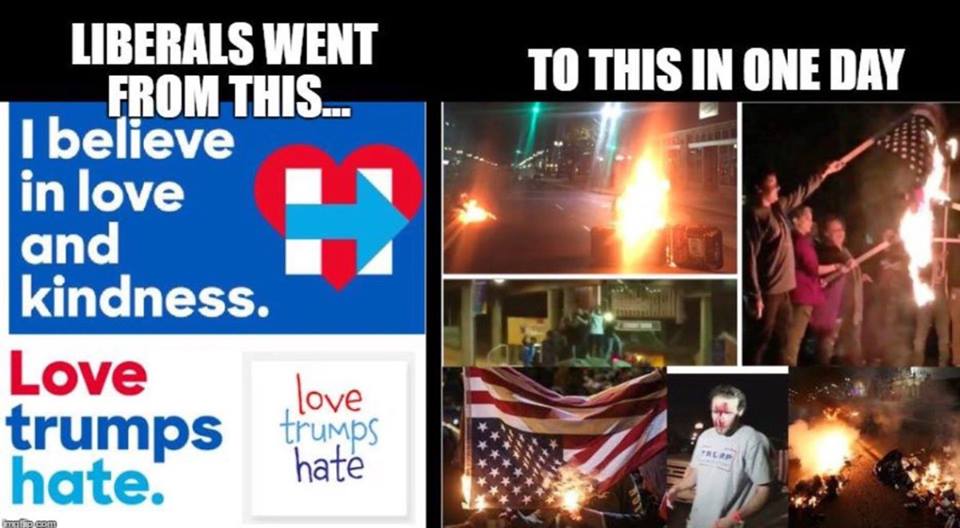 As soon as any conservative responds to Trump’s belittling names for his rivals by erupting in a murderous rage, that will be a fantastically good point. But until then, it’s idiotic. Unlike liberals, conservatives aren’t easily incited to violence by words.

What we’re seeing is the following: Prominent liberals repeatedly tell us, with deadly seriousness, that Trump and his supporters are: “Hitler,” “fascists,” “bigots,” “haters,” “racists,” “terrorists,” “criminals,” and “white supremacists,” which is then followed by liberals physically attacking conservatives.

Nearly every op-ed writer at The New York Times has compared Trump to Hitler. (The conservative on the op-ed page merely called him a “proto-fascist.”) If Trump is Hitler and his supporters Nazis, then the rational course of action for any civilized person is to kill them.

That’s not just a theory, it’s the result.

A few months ago, 38-year-old Justin Barkley shot and killed a UPS driver in a Walmart parking lot in Ithaca, New York, then ran over his body, because he thought he was killing Donald Trump. During his arraignment, Barkley told the judge: “I shot and killed Donald Trump purposely, intentionally, and very proudly.”

Schoolchildren across the country are being hospitalized from beatings for the crime of liking Trump. In Pasco, Oregon, a 29-year-old Trump supporter was stabbed in the throat by a Hispanic man, Alvaro Campos-Hernandez, after a political argument.

Last month, the anti-jihad scholar Robert Spencer was poisoned in Iceland by a Social Justice Warrior pretending to be a fan, sending Spencer to the hospital.

It’s become so normal for leftist thugs to assault anyone who likes Trump that, in Meriden, Connecticut, Wilson Echevarria and Anthony Hobdy leapt out of their car and started punching and hitting a man holding a Trump sign, rolling him into traffic right in front of a policeman.

If any one of these bloody attacks had been committed by a Trump supporter against a Muslim, a gay, a Mexican, a woman, or a Democrat, the media would have had to drop its Russia conspiracy theory to give us 24-7 coverage of the epidemic of right-wing violence.

The liberal response to this ceaseless mayhem toward conservatives is to produce a single nut, who fired a gun in the Comet Ping Pong pizzeria in Washington, D.C., last December (hurting no one) to “rescue children,” after reading on obscure right-wing blogs that the restaurant hid a Democratic pedophilia ring. (They’ve also hyped a long list of “hate crimes” that were utter hoaxes.)

Congratulations, liberals! You got one. And some tiny number of girls raped men last year. QED: Both sexes have a rape problem.

Liberal aggression has ratcheted up dramatically since the dawn of Trump, as has the dehumanizing rhetoric, but epic violence from the left is nothing new.

We don’t have to go back more than century to note that every presidential assassin and attempted presidential assassin who had a political motive was a leftist, a socialist, a communist, or a member of a hippie commune. (Charles J. Guiteau, Leon Czolgosz, Giuseppe Zangara, Lee Harvey Oswald, Lynette “Squeaky” Fromme, and Sara Jane Moore.)

Instead, we’ll start in the 1990s. Al Sharpton’s speeches helped inspire people to murder two people in Crown Heights in 1991 and seven people at Freddie’s Fashion Mart in 1995. As scary as David Duke and Richard Spencer are, I’ve never heard of anyone committing murder after listening to one of their speeches.

During the 2008 presidential campaign, among other acts of violence, Obama supporters Maced elderly volunteers in a McCain campaign office in Galax, Virginia. They threw Molotov cocktails at, stomped, and shredded McCain signs on a half-dozen families’ front yards around Portland. Another Obama supporter broke the McCain sign of a small middle-aged woman in midtown Manhattan, then hit her in the face with the stick.
(All this for John McCain!)

At the Republicans’ convention that year, hundreds of liberals were arrested for smashing police cars, slashing tires, and breaking store windows. Police seized Molotov cocktails, napalm bombs, and assorted firearms from the protesters. Elderly convention-goers were Maced and sent to the hospital after protesters threw bricks through the windows of convention buses. On the first day alone, the cops made 284 arrests, 130 for felonies.

(Although the measure would not have passed without the support of black voters, liberals held black people blameless for their opposition to gay marriage. Mormons and Catholics were a much funner target.)

In 2009, one conservative had his finger bitten off at a Tea Party rally in Thousand Oaks, California, by a man at a MoveOn.org counter-protest. At a St. Louis Tea Party rally, an African-American selling anti-Obama bumper stickers was beaten up by two Service Employees International Union thugs, resulting in charges.

For the past few years, the media have enthusiastically promoted Black Lives Matter, hoping to galvanize the black vote. The mother of Michael Brown was even invited to appear on stage at the Democrats’ convention. But, as the British discovered with their Indian auxiliaries during the Revolutionary War, having ginned them up, they couldn’t calm them down.

Liberals know damn well that their audience includes a not-insignificant portion of foaming-at-the-mouth lunatics, prepared, at the slightest provocation, to smash windows, burn down neighborhoods, physically attack, and even murder conservatives. But instead of toning down the rhetoric, the respectable left keeps throwing matches on the bone-dry tinder, and then indignantly asks, “Are you saying conservatives don’t do it, too?”

No, actually. We don’t