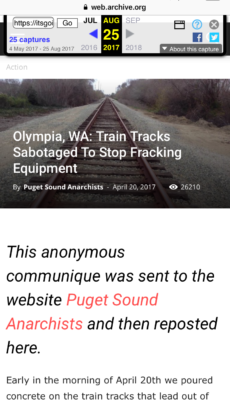 After an Amtrak train derailment near Seattle, Washington on Monday, some are wondering if it could be the work of anarchists opposed to fracking.

Jack Posobiec tweeted a link to a now-deleted article from April 20, 2017 on ItsGoingDown.org, and credited to Puget Sound Anarchists:

Early in the morning of April 20th we poured concrete on the train tracks that lead out of the Port of Olympia to block any trains from using the tracks. We took precautions to notify BNSF (the train company) – we called them and we used wires to send a signal that the tracks were blocked. We did this not to avoid damaging a train, nothing would bring bigger grins to our faces, but to avoid the risk of injuring railway workers.