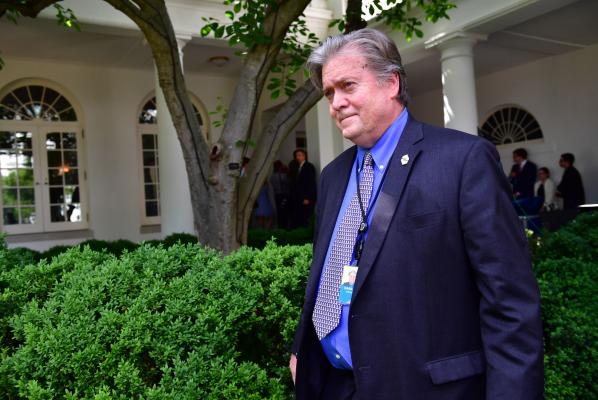 On Friday, Drudge Report scooped The New York Times and reported that White House chief strategist Steve Bannon, who also served as Trump’s chief campaign strategist in the latter months of the campaign, is out at the White House. According to the Times, Bannon submitted his resignation to Trump on August 7, but the announcement of his ouster was delayed until today thanks to the events in Charlottesville. Bannon claims that he’s leaving voluntarily; Trump’s aides insist he’s being fired. It doesn’t really matter much — Trump obviously sidelined Bannon in favor of a wide variety of characters ranging from Jared Kushner and Ivanka Trump to HR McMaster and John Kelly. Bannon’s influence had waned.

But Bannon still had his connections to the Mercer family, Trump’s top funders, and so Trump couldn’t overtly dump him. It would make sense that Bannon finally got tired of being a marginal player and wanted out.

That also makes sense of Bannon’s behavior over the last week: he’s preparing for the possibility of war with Trump.

Bannon is deeply vengeful, and supremely ambitious. He has already held the most powerful job he will ever have — unless, of course, his new job is to destroy Trump from the outside. And he set the groundwork for that job over the past week.

First, he pushed Trump not to alienate the alt-right — Bannon’s base — and succeeded. Bannon was widely credited in the media with encouraging Trump’s bizarre Tuesday press conference, at which Trump rehabilitated the alt-right and said there were “very fine people” protesting with white supremacists in Charlottesville. Trump could have easily carved off the alt-right and not lost much; Bannon, however, had to keep them in his pocket. Without them, he is merely another former government employee searching for a home. With them, he can threaten Trump with political Armageddon.

Second, he gave an insane interview with The American Prospect that isn’t insane at all in retrospect. In that interview, he laid out his own foreign policy and contrasted it with Trump’s — a fully isolationist foreign policy that the Trump administration almost certainly will not pursue, a militant and protectionist foreign policy with regard to trade with China, an “anti-globalist” policy totally at odds with some of Trump’s closest advisors like Gary Cohn.

All of this sets up the lines for battle. First, Trump will be seen as caving by “firing” Bannon — and Trump is completely incapable of just admitting that Bannon resigned.

Bannon’s play for Trump’s populist and alt-right bases will be partially successful. Outside the White House, Bannon can be more powerful than he was inside: if Trump doesn’t do what Bannon likes, Bannon will declare that he was ousted because the globalist insiders have taken over, and Trump has sold out the base. Bannon will attempt to claim the leadership of the movement he believes he built.

And he’ll do so from his platform at Breitbart.

That makes sense, since no one else will have him. There’s no interest in him from any of the major conservative think tanks: he’s toxic, he works poorly with others, and he’s utterly self-promoting. He has no real political future in electoral politics: he’s unattractive, deeply disliked across the country, and widely perceived as a class A a**hole. But that doesn’t matter for the people Breitbart has been catering to for more than a year. They see Bannon as their champion, and in leaving now and under these circumstances, Bannon has set himself up admirably as a Trumpian foil.

Bannon is also media savvy enough to know that he’ll never miss work being a Trump critic. The media will continue to book him. They’ll be eager to put him on television to criticize Trump; they think this will drive down Trump’s approval ratings. And Bannon will look for some other horse to back, or try to become the horse himself.

I said one year ago that Bannon understands that in the game of thrones, you win or die; he doesn’t intend to die. Now that he’s been beheaded by Trump, look for him to try to become the Night King, leaving destruction in his wake.