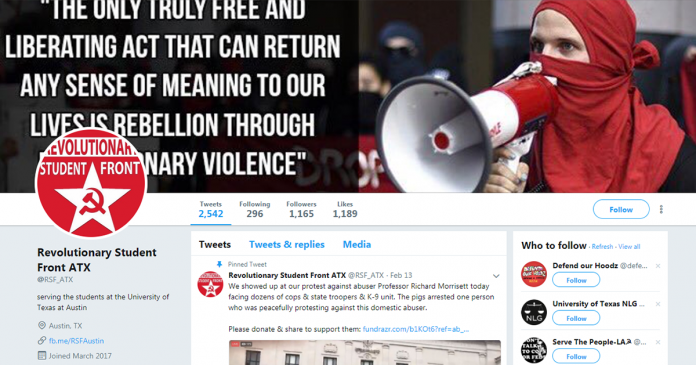 Some student groups at the University of Texas at Austin (UT-Austin) have eschewed their regular studies and extracurricular activities, and are instead advocating that their peers “rebel and organize” for communist “revolutionary war.”

“You can’t somehow revolutionize the capitalist system from within. Even the most “Marxist” professors can give you Marx and others, but never advance the full revolutionary conclusions of those ideas – that it is right to rebel and organize for revolutionary war,” Revolutionary Student Front ATX (RSF) tweeted on February 21.

According to RSF’s Facebook page, the group is “an organization for revolutionary anti-capitalist students in Austin, Texas.” However, a look at RSF’s official website provides a deeper look into the group’s beliefs.

“Real change will not come from within the system. The ruling class will never allow us to vote them out of power,” the group’s about page reads, adding, “Real change will only come when the masses of oppressed people worldwide unite to destroy the capitalist system and the institutions that uphold it.”

Furthermore, the group proclaims that the police are “enemies of the people,” that function only to “protect the ruling class, attack the working class, and enforce white supremacy,” and that the United States is a “settler-colonial society built on indigenous genocide and Afrikan slavery.”

This isn’t the first time the group has provoked controversy. In February, the group made headlines for advocating violence against police officers.

On February 20, RSF mocked their critics, tweeting a picture of an article titled, “University of Texas Antifa Group Advocates Throwing Bricks at Police Officers’ Heads,” accompanied by a picture of a brick with a communist hammer and sickle drawn in sharpie.

“Well, there is a reason we got our own Speedway bricks…” the tweet’s caption states.

The group was apparently even banned by Twitter for their violent content. “We’re back from our 12 hour ban! @Twitter takes weeks to ban fascists who doxx people in Austin, but won’t hesitate to suspend us over wishing death on fascists,” RSF tweeted on February 20, along with a picture of a twitter disciplinary message charging the group with “targeted harassment.”

Moreover, the group has repeatedly encouraged their fellow students to place the communist political revolution above their professional aspirations. “Don’t think about how to revolutionize your career; it’s not possible. Think about how your work can aid the revolution outside of the boundaries of your career,” RSF stated in a tweet.

RSF has also advertised “self-defense classes” in the service of their movement.

“We’re starting back up our weekly self-defense classes this weekend! Our first class is going to be hosted at UT on Saturday at 1:00 PM on the green space by the turtle pond,” RSF wrote in one tweet, along with a picture of multiple communist militants wearing the hammer and sickle and sporting war paint.

Big League Politics reached out to Revolutionary Student Front ATX to clarify its support of violence in the aim of political revolution, but did not receive a response in time for publication.