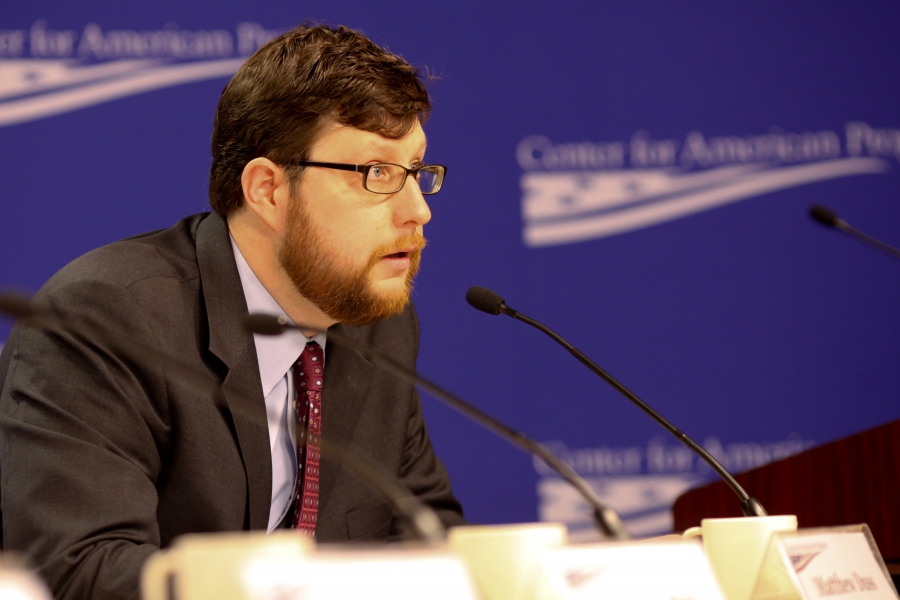 Support for the terrorists and sanctions on Israel.

Matt Duss had once compared Israel’s blockade of Hamas to “segregation in the American South.”

After the murder of the Henkin family in front of their children, the stabbing of a two-year-old and his mother in Jerusalem, Duss wrote, “it shouldn’t shock anyone that Israel’s harsh occupation and abuse provokes Palestinians.” He blamed the “rising violence” on Israel and not the PLO terrorists.

“Israel does need to start facing some costs and consequences for an occupation,” Matt Duss had told Al Jazeera. “The BDS movement has helped to elevate a debate that was long overdue.”

Matt Duss had traveled to Gaza to meet with Hamas members. He then whitewashed the Islamic terror group as a moderate organization willing to accept a two-state solution and stop killing Jews.

When Hamas kidnapped and murdered three Jewish teens, one of them American, Duss whined that Israel had “turned a police matter into a war” and launched a “crackdown on Hamas infrastructure in the West Bank under the pretext of searching for the missing boys”.

He described the Hamas terrorists as “Palestinian activists” and claimed that despite the brutal murders, “Hamas had largely held to the terms of the cease-fire.”

“A better option for dealing with stone-throwing Palestinian protesters might be to stop stealing their land,” Duss had once tweeted.

“One can recognize that anti-Semitism is a particularly pernicious bigotry among bigotries, however, while still questioning whether holding such views makes any leader ‘irrational'”, Duss wrote when defending the Iran nuke sellout.

Bernie Sanders had previously invited Duss to testify before the Democratic Platform Committee in a push for an anti-Israel platform. Duss had urged the Dems to call for an end to the Hamas blockade.

Before becoming a foreign policy advisor to Senator Sanders, Duss headed up the Foundation for Middle East Peace. Despite its misleading name, FMEP is a fixture of the anti-Israel lobby. It was founded by Merle Thorpe: Jr, a wealthy Washington D.C. lawyer who was the sugar daddy for anti-Israel causes.

Before that, Duss was at the center of a major anti-Semitic scandal when he headed up Middle East Progress for the Center for American Progress. CAP bloggers had escalated their attacks on the Jewish State by accusing Jews of “dual loyalty” and of being “Israel Firsters”.

Faiz Shakir, the editor-in-chief at ThinkProgress, had admitted that the hateful attacks by at least one CAP blogger used “terrible anti-Semitic language.”

The White House’s liaison called the CAP situation “troubling” and emphasized that this attitude did not represent the administration.

But apparently it does represent a prospective Bernie Sanders administration. That’s not surprising.

Senator Bernie Sanders has used his ethnic origins to mask the ugly anti-Semitism of his political allies, including Keith Ellison, the former Nation of Islam member whose virulent bigotry was, according to the Minnesota Daily opinion editor, “a genuine threat to the long-term safety and well-being of the Jewish people.”

When a bigot demanded to know Bernie Sanders’s relationship with the “Jewish community” while claiming that the “Zionist Jews” were “running the Federal Reserve”, “running Wall Street” and “running everything”, the Senator from Vermont responded by disavowing and bashing Israel.

“I may be Jewish, but you’re not going to find any candidate running for president, for example, to talk about Zionism and the Middle East,” Bernie groveled.

Like Ellison, Jesse Jackson and the Sandinistas, whom Sanders had defended despite their ugly anti-Semitism, Duss benefits from the Bernie protection racket for bigots. If you work for a man whose parents were Jewish, then you can’t possibly be accused of anti-Semitism.

What sort of foreign policy could Matt Duss be drawing up for Bernie Sanders?

Two years ago, Duss had called for using “sticks” on Israel and compared Jewish families living in Jerusalem to Iran’s nuclear weapons program. He suggested that political pressure could prevent “Israeli voters” from voting in the pro-Israel and anti-terrorist candidates whom he disapproves of.

“Voters currently see no costs or consequences to the occupation,” Matt Duss had complained. “By beginning to make those costs clear, as floating the possibility of sanctions does, the EU could play an important role in sharpening the choice before Israeli voters.”

Duss suggested that pressuring “millions of voters” in Israel was “worth a try.”

And who better to roll out sanctions on Israel than President Bernie Sanders?

When Bernie brought on Cornel West and James Zogby to push for an anti-Israel platform, a message was sent. When you bring in a 9/11 Truther and BDS activist who calls Israel an “apartheid state” and describes efforts to fight Hamas as “Jewish racism”, that says it all.

So does bringing in Matt Duss to work on “foreign policy”.

Bernie’s foreign policy has been very consistent. He supported the anti-Semitic Sandinistas who ethnically cleansed Jews from Nicaragua. He honeymooned in the USSR which persecuted Jews.

“No guns for Israel,” Sanders declared before the Yom Kippur War, which nearly destroyed the Jewish State. In 1990, he said that he “would like to see the US put more pressure on Israel.”

When Bernie Sanders reached out for perspective on the Middle East during his campaign, he contacted James Zogby, who had defended Hamas and Hezbollah, and Lawrence Wilkerson, who had accused Jewish officials of dual loyalty and suggested that Israel was behind Assad’s chemical weapons attacks.

Matt Duss fits perfectly with the rest of the sad, twisted freaks in the anti-Israel lobby.

And he’s valuable because he’s smoother than lunatics like Cornel West, a 9/11 Truther, or Lawrence Wilkerson, who accused Israel of “false flag” WMD attacks in Syria.

We already know what Bernie’s real foreign policy on Israel will be.

He wants to end military aid and divert money from Israel to Hamas. He’ll attempt to end the non-profit status of Jewish schools in areas claimed by Islamic terrorists. He’ll demand the ethnic cleansing of parts of Israel. And those demands will be backed by economic and political pressure.

That’s what Bernie wants. It’s what the radical extremists he panders to want him to do.

Duss is on board to make this ugliness presentable. And to help Bernie avoid tactical blunders like his lie that Israel had killed “10,000 innocent people” in Gaza.

When Bernie Sanders starts delivering his incoherent speeches attacking Israel, it will be based on the work of bigots and haters who have found a human shield with a Brooklyn accent for their agenda.