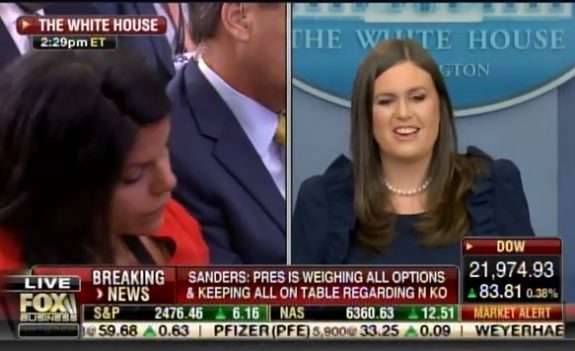 Sarah Huckabee Sanders went off on the liberal White House Press on Tuesday after questions came up on the Washington Post story that Donald Trump had leaked talking points to his son Donald Trump Jr. on his meeting in 2016 with Russian lawyer Natalia Veselnitskaya.

Sarah Huckabee Sanders went off on the liberal reporters in the room:

Look, the statement that Don Junior issued was true. There is no inaccuracy in the statement. The president weighed in as any father would based on the limited information that he had. This is all discussion frankly of no consequence. There was no follow-up. It was disclosed to the proper parties which is how The New York Times found out about it to begin with. The Democrats want to continue to use this as a PR stunt and they are doing everything they can to keep this story alive and in the papers every single day. The President, the American people, they voted America first, not Russia first… He certainly didn’t dictate. He certainly weighed in like any father would.

I think the bigger question is, everybody wants to make this some story about misleading. They only thing I see as misleading is a year’s worth of stories that have been fueling a false narrative about this Russia collusion!

This was an amazing exchange!