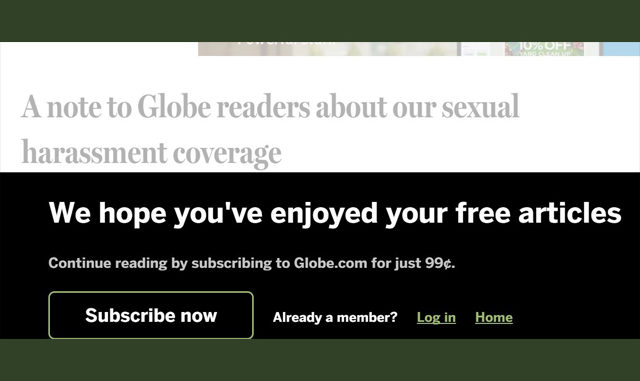 The editor of the largest newspaper in New England, and the focus of the 2015 Best Picture of the Year Oscar “Spotlight,” put his apology for covering up the name of the reporter he fired because of his sexually-related misconduct behind the paper’s paywall.”

“For the record, the journalist’s name is Jim O’Sullivan, a former State House reporter of four-plus years for the Globe,” wrote Brian McGory in a “Note to Globe readers about our sexual harassment coverage” posted late Thursday, two weeks after McGory refused to release the reporter’s name–only that he had been fired.

“I got too caught up on nuance and failed to grasp the need for transparency by this organization in this unprecedented reckoning,” he wrote from behind a paywall that cost 99 cents to pass through.

Other Boston-area media outlet had released his name, so it was already public before McGory named him.

“I am confirming what other news organizations have reported already,” he wrote. “He made lewd propositions to one newsroom colleague and to two women that we are aware of on Beacon Hill. Though we know he apologized to his Globe colleague and stopped his advances, we felt his actions were an abuse of his position as a Globe reporter and completely inappropriate.”

This whole @BostonGlobe thing is like @GlobeMcGrory came by and dumped a truckload of poop on top of a car. Then denied it. Then, two weeks later, said "shit, you're right" and offered to clean off a single side mirror. But the car is still mostly covered in poop. https://t.co/5kx0xON03t

The paper’s internal review of O’Sullivan’s work also showed that his reporting may have also been compromised by his sexual predations.

“We have since gone back and, to the best of our ability, reviewed O’Sullivan’s work to make sure it wasn’t compromised by his actions,” he wrote.