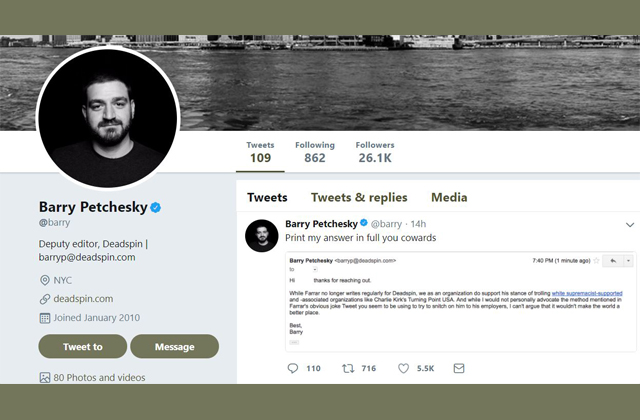 A Deadspsin editor is not backing down after failing to disavow a former employee who called for the deaths of conservative students.

You gotta be shitting me. pic.twitter.com/521vGvkFVA

“While Farrar no longer writes for Deadspin regularly, we as an organization do support his stance of trolling white supremacist supported and associated organizations like Charlie Kirk’s Turning Point USA,” said Barry Petchesky, deputy editor at Deadspin.

Petchesky was responding to a request for comment from Independent Journal Review regarding remarks made on Twitter by Deadspin contributor Jesse Farrar:

Interesting, @BronzeHammer seems to call for the death of conservative students via water boarding suffocation

Im sure he is joking, but imagine if conservatives made a joke like that against liberals? pic.twitter.com/UvNXSLJsw0

Farrar appeared to advocate for the murder of conservative college students in responding to a Tweet from Turning Point USA’s founder Charlie Kirk, according to Kirk’s response. TPUSA is a conservative student organization with hundreds of chapters on college ad high school campuses around the country.

“I get countless of [sic] messages from students who say professors are lowering their grades & penalizing them for being conservative,” Kirk said.

“They shouldn’t do that. It’s not right. They should hold the conservative students heads under water until they stop breathing instead,” Farrar said in response.

His original response has now been deleted.

“He’s quite literally advocating for water boarding of people he disagrees with, that’s not what America is built on,” she said.

“I think it’s disgusting that someone would consider murdering another human in the first place, but particularly reprehensible for political views to be the reason,” he said.

Though Farrar deleted the Tweet pictured above, he re-affirmed that he was not joking about his stance when Kirk tried to give him the benefit of the doubt:

I am not joking.

“I’m sure he was joking, but imagine if conservatives made a joke like that against liberals,” Kirk said.

“I am not joking,” said Farrar in response.

Petchesky said in his email response to Independent Journal Review that he would not personally advocate for drowning conservative students, and that Farrar obviously meant the Tweet as a joke.