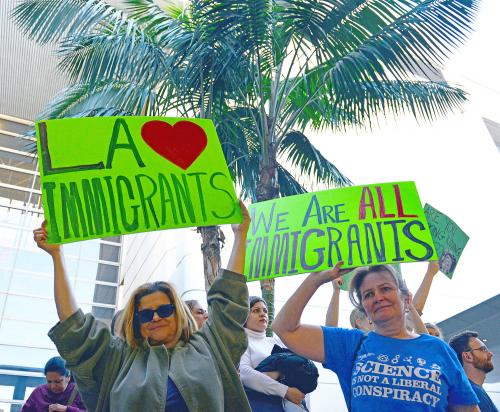 SACRAMENTO, Calif. (CN) – Over objections from sheriffs’ unions and the California Police Chiefs Association, the California Assembly Judiciary Committee took a step forward in making the Golden State a sanctuary for undocumented immigrants.

Opponents call it a “sanctuary state measure” that goes against federal immigration law and obstructs the ability of Immigration and Customs Enforcement agents to do their job.

De Leon said the bill is only necessary because of the election of President Donald Trump and his campaign promise to drastically reduce the number of undocumented immigrants living in the United States.

“If Jeb Bush or Chris Christie or John Kasich had been elected, this bill would not be necessary,” De Leon said. “These are extraordinary times.”

“Under constitutional threats from the reckless Trump administration, SB 54 protects state and local law enforcement and resources necessary to keep our communities safe,” De Leon said. “ICE is out to arrest and deport honest, hard-working parents who obey the laws and pay their taxes and owe allegiance to the red, white and blue. Arrests of undocumented immigrants with no previous criminal record are up 150 percent since Trump became president.”

Assemblywoman Eloise Gomez Reyes said the measure is necessary not just for California, but for the nation.

“California must send a clear message that we will remain the last line of defense against the fear-mongering and xenophobia,” Reyes said. “Rather than addressing the failure of policy, the federal solution has been to demonize our immigrant communities.”

De Leon said the bill protects the trust police departments need to effectively investigate crimes, by ensuring witnesses and victims will not be arrested and deported just for cooperating with law enforcement. The measure prevents communication between state and local police with federal authorities except within a narrow list of crimes for which an undocumented person must have been previously convicted.

“Senate Bill 54 is not about safeguarding criminals,” De Leon said. “We are focusing on arresting dangerous criminals, prosecuting them and imprisoning them, not engaging in criminal dumping and letting them avoid prosecution.”

Despite a May 25 raid in which ICE agents arrested 188 illegal immigrants in Los Angeles, total numbers of arrests of illegal immigrants are relatively flat in California and somewhat lower than during the Obama administration, according to U.S. immigration officials.

Many of those arrested in the May 25 raids had ties to El Salvadoran prison gangs such as MS-13. About 90 percent had previous criminal records for a variety of crimes including drug offenses, domestic violence, DUI, sex crimes, battery, weapons violations, assault, burglary, fraud, vehicle theft, arson, cruelty to a child, robbery, obstructing justice, property damage, larceny, escape, manslaughter, prostitution, trespassing, incest, and receipt of stolen property.

Under SB 54, virtually all of these individuals wouldn’t be transferred to ICE after serving time for convictions since the measure specifies “serious felonies” – which doesn’t include most of the crimes precipitating the May 25 raids.

Assemblyman Kevin Kiley, R-Rocklin, pointed out that Holder was paid for his analysis and released his approval of the bill one day before announcing his intention to run for president in 2020.

Kiley questioned Holder’s reliability and asked why De Leon paid for Holder’s analysis rather than rely on one prepared by the Legislative Council. Kiley said Holder refused to meet with GOP representatives to discuss the measure, opting instead to meet only with Democrats.

“We believe this bill provides sanctuary to criminals and makes our communities less safe,” Brown said. “SB 54 would result in many dangerous criminal offenders being released to our streets without proper communication and cooperation with immigration authorities.”

Brown said that due to the narrow definition of crimes that permit local law enforcement interaction, many criminals – including those convicted of burglary, multiple DUIs, spousal abuse and murder suspects who have not been convicted – would not be turned over to ICE.

A similar bill passed by the Legislature in 2012 was vetoed by Gov. Jerry Brown because it was missing serious crimes, all of which are also absent from SB 54. De Leon has refused to make amendments proposed by the Sheriffs Association to add these crimes and to address other concerns held by sheriff’s departments, whose primary responsibilities are the operation of jails.

Conflicting federal laws could tie the measure up if it is approved and signed into law. Legislation signed by President Bill Clinton in the mid-1990s bars states from creating laws that restrict communication with federal law enforcement agencies.

Meanwhile, judicial decisions at the federal level have also created precedence that the federal government cannot commandeer local law enforcement resources for the purpose of immigration enforcement, nor can they force states to use resources to further federal goals.

The measure is supported by immigrant rights groups and the ACLU, and has received support from law enforcement agencies including the Los Angeles Police Department. The LAPD sees the measure as an extension of its policy that has been in effect for more than 40 years.