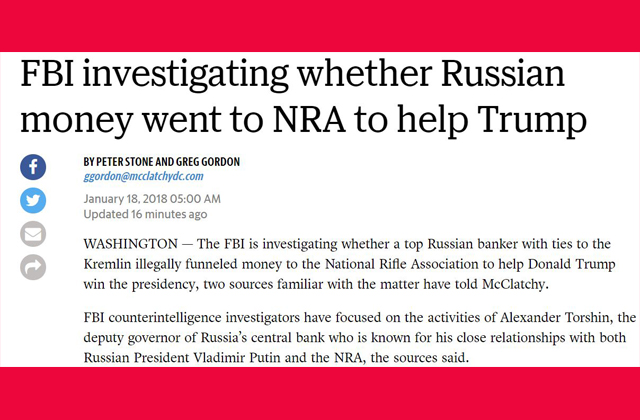 Capitol Hill conservatives are questioning the timing of an article that the McClatchy news service ran claiming that the FBI was investigating a possible nexus between the National Rifle Association and the Russian government–hours before the House Permanent Select Committee on Intelligence released the transcripts of Glenn R. Simpson’s Nov. 14 testimony about that connection.

Simpson, the co-founder and leader of the political opposition research firm Fusion GPS, testified to the committee about Russian infiltration of the NRA in response to questions from Rep. K. L. Jacqueline “Jackie” Speier (D.-Calif.).

MS. SPEIER: Okay. What is the interest of Russia with the National Rifle Association?

MR. SIMPSON: I think that most of what we have found is pretty much out there now. You know, it’s been said by others, but, you know, what eventually – it appears the Russians, you know, infiltrated the NRA And there is more than one explanation for why. But I would say broadly speaking, it appears that the
Russian operation was designed to infiltrate conservative organizations. And they targeted various conservative organizations, religious and otherwise, and they seem to have made a very concerted effort to get in with the NRA.

The McClatchy report not only followed the same narrative of Simpson’s testimony, but also claimed that the FBI was investigating Russian financial support to and collusion with the NRA.

What got the eye of Capitol Hill conservatives was McClatchy’s sourcing.