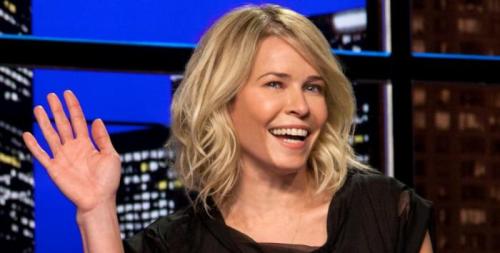 Just when you thought Netflix’s Chelsea could go no lower on the lame scale, Chelsea Handler proves you wrong. In the July 28th episode titled “The Future Is Now,” Handler calls President Trump “our brainless monkey in the White House.” Ugh.

Opening the show with her new theory as to why President Trump is “this medical oddity,” she uses a Venn diagram to intersect Trump and a monkey. This results in – wait for it – “monkey business.” So lame.

She claims to have read a 1940’s study about scientists removing parts of monkeys’ brains to study a brain disorder called Kluver-Bucy. In this experiment, part of the monkey’s prefrontal cortex was removed. This part of the brain controls decision-making. She lists similar behavior between the brainless monkeys and “our brainless monkey in the White House” – visual agnosia, amnesia, dietary abnormalities, hyper-sexuality and zero impulse control. Hilarious, right?

In summation, Chelsea states, “It is my professional opinion that the leader of the free world is essentially a brainless monkey and no one close to him is doing anything about it. His whole tribe is hear no evil, see no evil, speak no evil.” Then she launched into full sore loser activist mode by instructing viewers that “Everyone in this country needs to use their voice to get this fat monkey off America’s back.” Clearly, the word of the day is monkey.

Unfortunately for Hollywood liberals like Chelsea Handler, America spoke in a presidential election last November and Trump was declared the winner.

In her closing rant to the audience, Chelsea said, “Good-bye, and to everyone in the transgender community, I am sorry that a man who’s never served in the military a day in his life is denying you the right to serve your country. Thank you for your service, and thank you for your bravery. And to the members of the Republican Party that continue to choose party over politics, grow a fucking spine. Good night.”

Handler neglected to note that another president who never served in the military a day in his life – Barack Obama – only put in place the policy allowing openly transgender soldiers in the military a short year ago. Also, this is something President Trump tweeted about, not legislation put in place by the Republican Party.

This season of Chelsea is simply a vehicle for Handler to use to promote her liberal agenda and vent her frustration that her candidate lost the election.