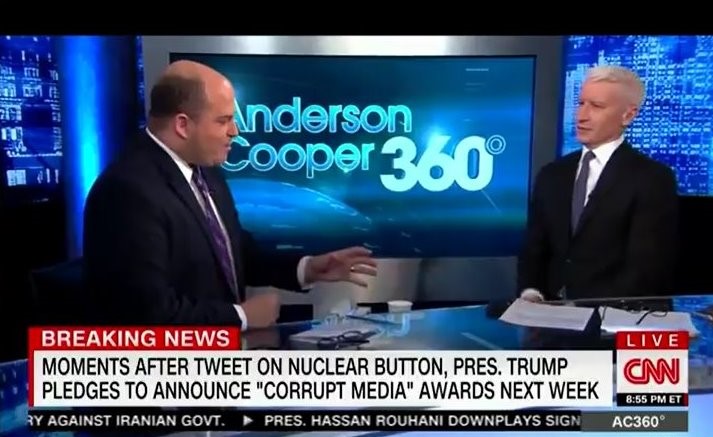 CNN talking heads are palpitating over President Trump’s plans to announce “the most dishonest & corrupt media awards” next week, with some arguing the “madness” is evidence the president is mentally unstable.

I will be announcing THE MOST DISHONEST & CORRUPT MEDIA AWARDS OF THE YEAR on Monday at 5:00 o’clock. Subjects will cover Dishonesty & Bad Reporting in various categories from the Fake News Media. Stay tuned!

CNN’s Anderson Cooper dissected the tweet and other Trump posts in the New Year with the help of CNN “senior media correspondent” Brian Stelter.

“This is something he seemed to propose before the New Year, Anderson, the idea of a fake news trophy that should be awarded. The (Republican National Committee) then picked up on it and said they would take nominations,” Stelter said.

North Korean Leader Kim Jong Un just stated that the “Nuclear Button is on his desk at all times.” Will someone from his depleted and food starved regime please inform him that I too have a Nuclear Button, but it is a much bigger & more powerful one than his, and my Button works!

“Sanctions and ‘other’ pressures are beginning to have a big impact on North Korea. Soldiers are dangerously fleeing to South Korea. Rocket Man now wants to talk to South Korea for first time. Perhaps that is good news, perhaps not – we will see!” Trump tweeted.

“Considering how the New Year has started, what does it say about the year?” Anderson Cooper asked Stelter about Trump’s Twitter activity.

“Madness! And I think we should start to call it that,” the “senior media correspondent” said. “When President Trump was inaugurated last January, some writers, some columnists … started right away to raise concerns about the president’s mental health, about his fitness for office.

“In the months that followed, we saw Republican senators like Jeff Flake bring these issues up, try to ask about his fitness for office. Bob Corker, another name that comes to mind.”

Stelter then made the leap to analyzing Trump’s Twitter feed to make a determination about the alleged mental health concerns.

“I think we could apply a test to his 16 tweets today, and the test would be: If this were the leader of Germany or China or Brazil, what would we say? How would we cover these tweets?

“We would say these are the messages from a person who is not well, from a leader who is not fit for office.”

Trump’s ongoing feud with CNN is common knowledge, and he’s repeatedly criticized the “fake news” site among liberally biased outlets like The New York Times, The Washington Post, MSNBC and others for biased and inaccurate coverage.