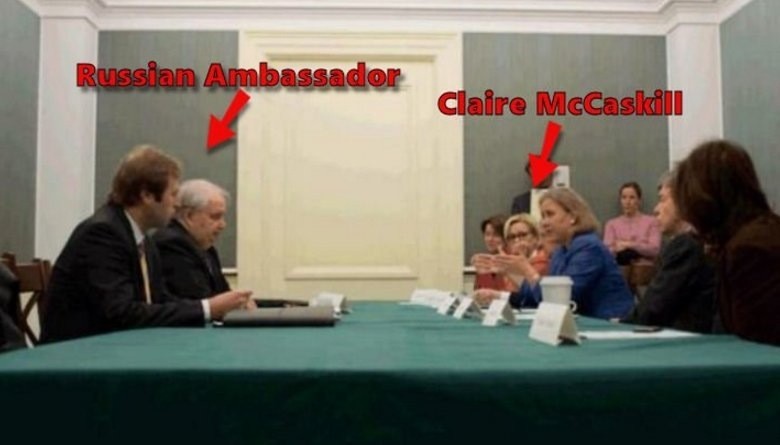 We need a special prosecutor to look into whether Sen. Claire McCaskill (D-MO) is guilty of colluding with the Russians. I don’t like it, but these are their rules. Any meeting or interactions with the Russians is inappropriate. It’s treason—and the fact that she lied about it makes the collusion allegation sound more damning. Of course, this is all crap, but that’s how Democrats sound every time Russia and Trump are the topic of discussion. As if some sort of widespread Manchurian Candidate-style operation was devised within the halls of the Kremlin. There is no evidence of collusion between the Trump campaign and the Russians. Every time there’s been an update, such as more undisclosed meetings, there’s always that seventh or eighth paragraph of the story that states nothing about such rendezvous points to any wrongdoing or collusion. What we do know about Sen. McCaskill is that she lied about meeting the Russian ambassador.

I've been on the Armed Services Com for 10 years.No call or meeting w/Russian ambassador. Ever. Ambassadors call members of Foreign Rel Com.

Off to meeting w/Russian Ambassador. Upset about the arbitrary/cruel decision to end all US adoptions,even those in process.

Let’s circle back to Katie’s post, where the Missouri Democrats said that she’s never met with Russian Ambassador Sergey Kislyak during her 10-year tenure on the Senate Armed Services Committee. That quickly turned into a blast of buckshot to the face when a she tweeted in 2013, that she was off to meet with the Russian ambassador. Now, CNN, who didn’t screw this story up for once, has found that the senator attended a black tie event at Kislyak’s D.C. residence:

CNN has learned McCaskill spent an evening at a black-tie reception at the ambassador’s Washington residence in November 2015.

McCaskill was photographed at the event, honoring former Democratic Rep. James Symington, who hails from her state of Missouri and worked to promote US-Russia relations.

In an interview, McCaskill acknowledged attending the dinner, but she said she only did so because of her long-standing relationship with Symington, whom she said “kind of got me started in politics.” She claimed the 140-character limit on Twitter did not let her clarify that she never met “one-on-one” with the Russian ambassador, and added she “did not” speak with Kislyak at the reception.

Yeah, it’s still not what Democrats would deem acceptable if you were a Republican, Ms. McCaskill. The Russian hysteria that’s engulfed the Democratic Party is bordering on Russophobia, with noted progressives, like The Nation’s Katrina Vanden Huevel, describing it as “neo-McCarthyite” in nature. In the eyes of the New York Times’ editorial board, McCaskill attendance would be deemed “nefarious.” But, alas—she’s a Democrat so no harm done. If this were Attorney General Jeff Sessions in question, he would gotten the electric chair.