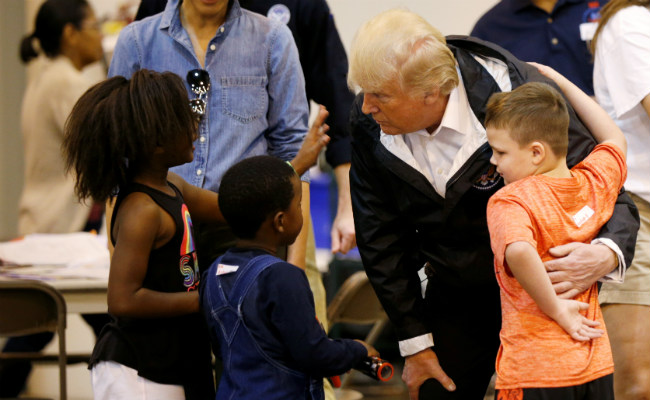 President Donald Trump on Saturday traveled to Houston to meet with victims of the devastating Hurricane Harvey, playing with children in an evacuation center and handing out food and necessary supplies to those hit hardest by the natural disaster.

Trump thanked volunteers and first responders, passing out food with his wife, Melania. The president, who mainstream media outlets have said lacked “emapthy” during the early days of the hurricane, hugged and kissed little children in the “kid zone” at Houston’s NRG Center, a massive facility that has become the city’s largest emergency shelter.

“The message is that things are working out well,” Trump said at the center. “Really, I think people appreciate what’s been done. It’s been done very efficiently, very well, and that’s what we want. We’re very happy with the way everything is going. A lot of love. There’s a lot of love.”

Trump was asked about what he saw the from the window of Air Force One as he flew in.

Trump took pictures with volunteers and chatted with victims of the storm, alongside Texas Gov. Greg Abbott. At one point, Trump leaned down and cupped a little boy’s face while the two spoke — and then gave him a high five. He lifted a little girl up and gave her a kiss, one pool report said.

Trump declared Sunday a national day of prayer, then went to a church in nearby Pearland, where he and the first lady helped load cars with boxes of supplies for victims. He said the volunteer work was “good exercise.”

More than 50 inches of rain pounded Texas as Harvey came ashore, went back into the Gulf of Mexicao, and came back again for one more strike. The president on Friday asked Congress for an initial $7.85 billion to cover relief and recovery efforts.

On his second stop in Texas on Saturday, Trump visited a church in Houston that is being used as a distribution center. He offered congratulations to Abbott on the recovery effort and said Texas will rise to the huge challenge.

Inside First Church of Pearland, Elaine Ybarra, 41, who was holding her 10-year-old son, Chris, said: “It’s quite humbling to have somebody of his stature come to this church.”

“Him being here and bringing global attention to everything that’s going on here, he brings up prayers from around the world.”