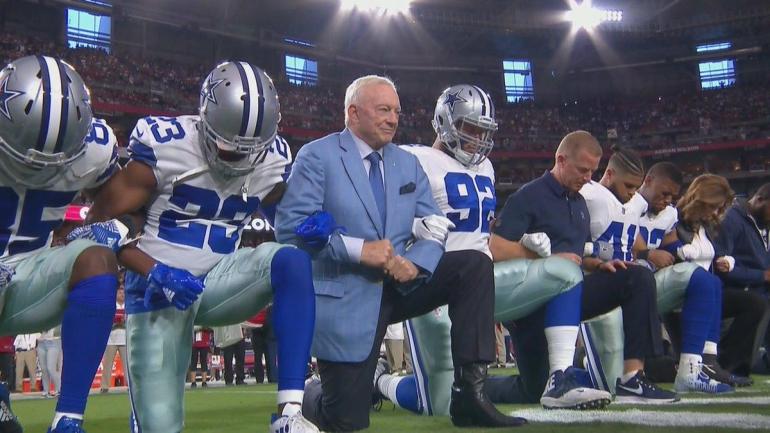 Cowboys Owner Jerry Jones has had it with anthem protests. Just how tired of it is he? Tired enough that Jones has now publicly said that if his team doesn’t respect the flag, they’re not going to play.

Jones was asked by Brandon George of the Dallas Morning News, about two Cowboys players who raised their fists at the end of the anthem. Jones said he did not see the raised fists. But then, Jones made a definitive statement about how he wants to see his team to handle the anthem from now on.

Jones continued, “We’re going to respect the flag, and I’m going to create the perception of it. And we have. I’m not aware and wouldn’t know what you’re talking about. I’m not aware of that. . . . We as a team are very much on the page together. We have made our expression that we’re together.”

The two Cowboys who raised their fists, Damontre Moore and David Irving, supposedly, weren’t on that same page.

The statement from Jones is the strongest from any owner yet. The NFL has a policy about paying respect to the anthem. Though, not necessarily a rule explicitly preventing kneeling. So, Jones is definitely going out on somewhat of a limb if he attempts to crackdown on future protesters.

When asked about Vice President Pence, who left the Colts game after taking exception to the 49ers staging a 23-player protest during the anthem, Jones seemed to support the Vice President: “I’m saying our vice president of the United States, if in his opinion there’s disrespect of the flag, then he should – he basically should — express himself however he wants to. He’s got rights, too, so however he wants to do it. He felt that not standing for the flag is disrespectful. I do, too. The league, in my mind, should absolutely take the rules we’ve got on the books and make sure that we do not give the perception that we’re disrespecting the flag.”

As mentioned before, the rules on the books don’t necessarily prohibit what the players are doing. As Pro Football Talk relays it: “The NFL’s game operations manual says “all players must be on the sideline for the National Anthem.””

The rule also states, “Failure to be on the field by the start of the National Anthem may result in discipline, such as fines, suspensions, and/or the forfeiture of draft choice(s) for violations of the above, including first offenses.”’

In other words, the rule requires that all players be on the sideline for the anthem, but not that they stand.

Basically, Jerry Jones is saying all the right things, but is technically wrong on the details. Though, as a powerful owner of the league’s richest organization, he’s in a prime spot to go before his fellow owners, and Commissioner Roger Goodell, and get the rules changed.