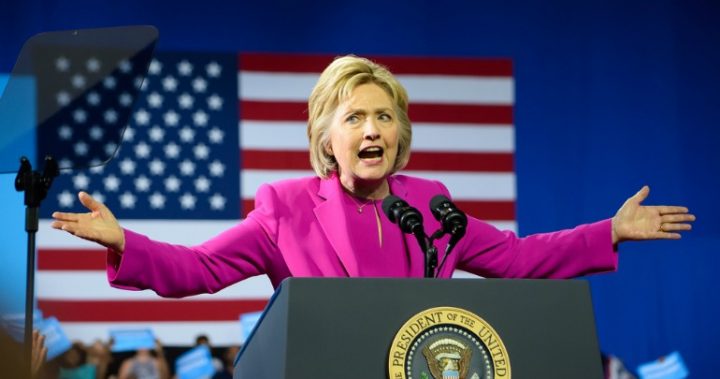 Crooked Hillary is desperate to distract the media cycle following Donna Brazile’s devastating revelation that Clinton took control over the DNC and rigged the primary in her favor.

Even left-wing outlets are covering the Donna Brazile bombshell. Elizabeth Fauxcahontas Warren called the revelation a “real problem” and admitted the primary was rigged in Hillary’s favor.

Like clockwork, Hillary tried to distract from the media firestorm. Twitter was set ablaze Thursday morning following the POLITICO article Donna Brazile authored wherein she exposed the underbelly of the DNC thanks to Hillary’s dirty tricks.

Hillary sent out of tweet encouraging women to “Be resilient” in the face of “sexism and misogyny”. 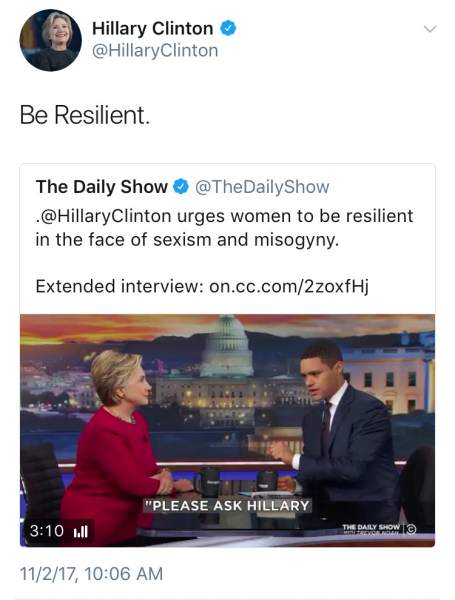 Ironically the video clip Hillary tweeted was her admitting to Trevor Noah of ‘The Daily Show’ she paid for the garbage Russia dossier which was used to smear her opponent Donald Trump.

So Hillary is allowed to rig the primaries against a man, Bernie Sanders and pay for a dossier full of lies to smear her male political opponent?

Hillary Clinton’s hatred for men is apparent. She should put her misandry in check.

So basically you've been ripping off American's for your whole entire career and selling out OUR COUNTRY to foreigners. YOU MAKE ME SICK! pic.twitter.com/6GOAvndpfY

How does it make you feel that Donna Brazile sold you out for a book deal?#DonnaBrazile

Donna Brazile just sold out you, the DNC, and Debbie Wasserman Schultz. You're going to need more than resilience. #DonnaBrazile pic.twitter.com/VSrIb2WhkQ

You rigged the primary Hillary. You should apologize to every Bernie supporter. https://t.co/2JcLjYbdHm