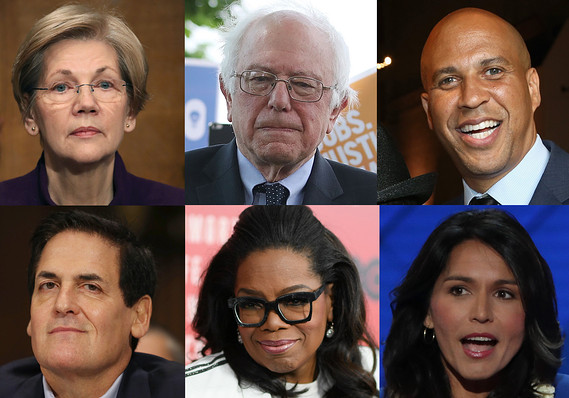 One long-time Democratic Party insider said Friday that the party’s sable of potential 2020 presidential candidates are not a very impressive bunch.

Democrats are casting about to find new faces with fresh ideas after last year’s electoral defeats, but one strategist is not enthused with the options. Many of leading contenders are not doing a good job of standing out from the pack, according to veteran Democratic insider Phil Singer.

“You have a bunch of Celine Dions but there’s no Beatles,” Singer, an adviser who served as press secretary on Hillary Clinton’s 2008 presidential run, told the Hill about the 30 or so Democrats rumored to be vying for the White House.

His reference implies that some on the list, such as California Sen. Kamala Harris and former Vice President Joe Biden, might be serviceable candidates in a tight squeeze, but they are hardly all-star-types ready to shake the foundation of the political world.

One of Singer’s cohorts argues the list isn’t all that tepid. Democratic strategist Brad Bannon told reporters that Vermont Sen. Bernie Sanders could be the new standard bearer for the party.

“His people have never gone away,” said Bannon, who heads a Democratic consulting and polling firm in Washington, D.C. “And he has a loyal core following out there that will be with him come hell or high water.”

“The Sanders wing is becoming the dominant wing of the party,” he added, noting the leftward tilt of the Democratic Party.

Democrats have been reeling ever since reports came out in November suggesting Clinton financially backed the Democratic National Committee (DNC) well before she became the 2016 presidential candidate.

Former President Barack Obama and various Democratic officials left the DNC in such a decrepit state that Clinton was forced to bail out the party during her run, interim DNC chief Donna Brazile noted in her book about her time at the DNC.

“I’m not sure a man can get nominated as the Democratic nominee right now,” Democratic strategist Jamal Simmons told reporters, referring to the slew of sexual allegation charges various women have lodged against congressmen like Democratic Sen. Al Franken of Minnesota.

“There are some who could and should, but the level of vetting on male candidates will be more intense than normal,” he added. “Democrats should be looking for people to capture this energy that is out there right now, and I think Elizabeth Warren belongs at the top of that list.”