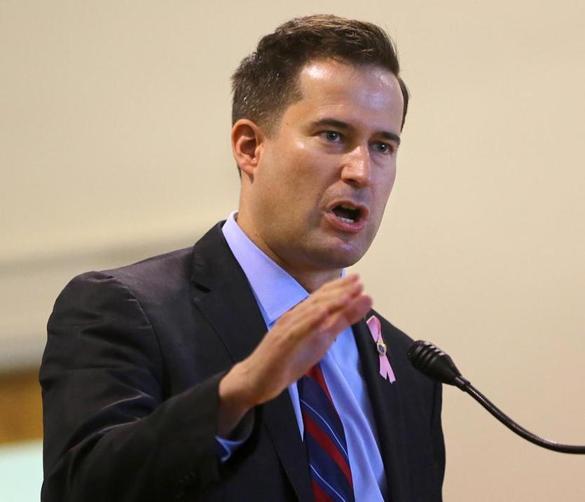 Tuesday on NPR, Rep. Seth Moulton (D-MA) said Democrats are not winning elections because he said that it was seen as “out of touch with most of America.”

SIEGEL: What was so big about the loss in Georgia that it shows the Democrats need a new message, a new vision?

MOULTON: Well, now we’re 0-4 in these congressional special elections. And we’re at the worst electoral position that the Democratic Party has been in in decades. And so when you keep losing like that, you can’t keep doing the same old thing.

SIEGEL: Well, first, as to message, I went to the website of Jon Ossoff, the Democrat who lost in Georgia last week. And there’s a list of priorities. Number one, it says, our economy. John’s a small business owner, executive, entrepreneur. He knows what it means to grow a company, meet a payroll, balance budgets. And it goes on to say that he has the experience to help Georgia develop into an economic powerhouse. And he also stands for raising the minimum wage to equal pay for equal work. What’s the matter with that message? What’s wrong with the priority there?

MOULTON: Well, that’s actually a pretty good message. Now, John had some other problems, like the fact that he couldn’t even vote for himself in the election.

SIEGEL: You mean because he lived outside the district?

MOULTON: That’s right. But the bigger problem is that Republicans effectively tied him and his campaign to the national party and to our national leadership. And that’s where the problem lies.

SIEGEL: They tied him above all to Nancy Pelosi. Back in November, you voted for Ohio Congressman Tim Ryan when he challenged Nancy Pelosi. Should Pelosi go because she’s too old, she’s too liberal, she’s not liberal enough, they make an effective caricature of her? What’s her great shortcoming?

MOULTON: Look, a lot of the things they say about her are not true, and they’re not fair, but they’re nonetheless effective. And I think people look at our party right now as really out of touch with most of America. And when you have a party leadership that is out of touch with the rest of the country, then that’s a real problem for the entire party.

SIEGEL: Out of touch because she’s from San Francisco and her number two is from just outside Washington, D.C.? Is that the problem – geographical?

MOULTON: Well, I think we need to show people that they have a place in the Democratic Party whether they come from San Francisco or St. Louis. Clearly, if you look at the congressional map, we’re doing very well on the coasts and we’re not doing very well in vast swaths of the country, even despite having policies that are very good for a lot of folks that we think should be voting for us yet consistently choose to vote for Republicans.

MOULTON: Well, all these things are important. And they’re certainly important to groups of people that we want to have a place in the Democratic Party. But we’ve got to talk about other things as well. Just last week I started a new national security task force to talk about real leadership in national security at a time when the Republicans under President Trump are truly leading us astray.

SIEGEL: Just to understand, if you could sum up – if you have a sense of what the message is that would resonate with middle America and, frankly, with white middle-class voters, what’s that message?

MOULTON: Well, Robert, it’s got to be an economic message. It’s got to be a message of opportunity. Not just fairness, but how do we get you back to work? I think we’ve got to have a message that’s focused on where the economy is going, not just where it’s been. Not about going back to 1955 and going back into the coal mines, but really how everybody in America can be a part of the economy of the future.

SIEGEL: Is a man like Congressman Tim Ryan of Ohio, whom you supported for speaker – is he your idea of the right kind of messenger?

MOULTON: Well, I just looked at the election that we had. We had Nancy Pelosi running versus Congressman Tim Ryan. You can poke holes in either of them. Neither is a perfect candidate. And each has virtues and strengths. But right now, when we’re losing voters in middle America, I thought that Tim Ryan, someone who has had to get re-elected multiple times right in the heart of the Rust Belt, is the kind of leader that we could use in the party.