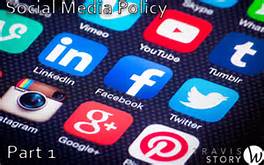 On Wednesday, lawyers for Facebook, Twitter and Google faced down Democratic lawmakers who essentially threatened them for not shutting down Russian propaganda during the 2016 election cycle. Democrats have been adamant that distribution of Russian propaganda on social media played a major role in Hillary Clinton’s election defeat, and are now seeking to use that assumption as a lever to regulate the internet giants.

Senator Dianne Feinstein (D-CA) complained that the platforms had been “misused.” She threatened, “you have to be the ones who do something about it – or we will.”

.@SenFeinstein: You've created these platforms & now they are being misused and you have to be the ones to do something about it or we will. pic.twitter.com/ASgi1o2A9M

I must say, I don’t think you get it. You’re general counsels, you defend your company. What we’re talking about is a cataclysmic change. What we’re talking about is the beginning of cyber warfare. What we’re talking about is a major foreign power with the sophistication and ability to involve themselves in a presidential election and sow conflict and discontent all over this country. We are not going to go away, gentlemen. And this is a very big deal. I went home last night with profound disappointment. I asked specific questions, I got vague answers. And that just won’t do. You have a huge problem on your hands. And the US is going to be the first of the countries to bring it to your attention, and other countries are going to follow I’m sure. Because you bear this responsibility.

Feinstein wasn’t the only Democrat talking about cracking down on First Amendment exercise for purposes of preventing foreign election interference. Senator Ron Wyden (D-OR) stated, “We’d like to walk out of here knowing the changes you’re going to support.”

Now, there’s little question that the Russians were interested in sowing discord in the country. But the efforts singled out by the Democrats were singly idiotic. They included this graphic of “Buff Bernie” in March 2016, clicked on some 54 times, with just 848 impressions: 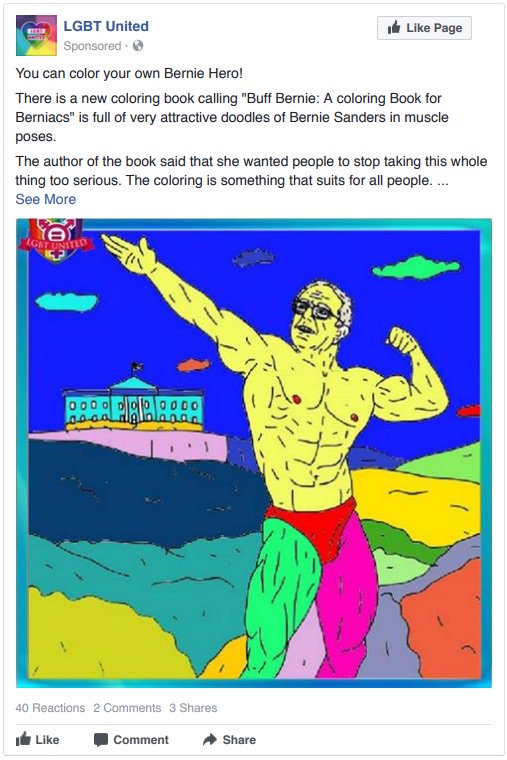 Or this one of a father teaching his child to shoot, clicked on 857 times. 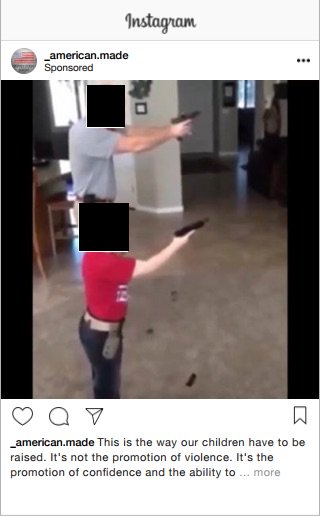 This was perhaps the most hilarious example, clicked on a grand total of 14 times, 13 of them allegedly by Bill Mitchell. 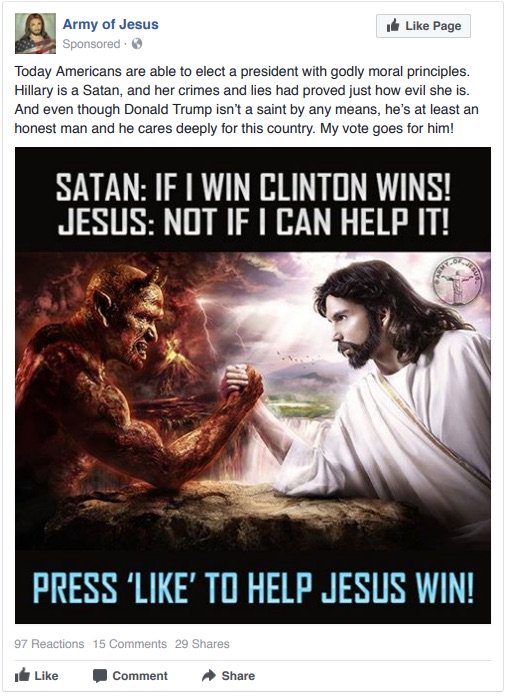 Who thinks these sorts of ads actually swung the election?

And here’s the bigger problem: how do you crack down on dissemination of information in a public space? Presumably, these internet companies could shut down accounts that pretend to represent constituencies they clearly don’t – a Russian clickfarm generating an “American United” Facebook account should be relatively simple to ferret out. But Feinstein wants more than that. She asked Twitter, for example, to hand over all ads and organic content somehow connected with Russia “attempting to suppress voter turnout or otherwise interfere with the right to vote.” That’s insanely vague, considering that Democrats believe all voter ID laws are designed to do just that. So what happens if an American citizen in Russia decides to buy a Facebook ad promoting voter ID?

Regulating the internet is a dangerous business. It’s particularly dangerous when the question isn’t Russian lawbreaking but Russian disinformation campaigns. Campaign finance reform prevents foreign countries from making elections contributions. But what about generalized political advertising? We have lobbyists who do that every day. And RT operates right out in the open.

Here’s the question: is there more danger to the First Amendment from Russians buying ads on Facebook that touch on American politics, or from members of the federal government seeking to regulate the content that can be posted on Facebook and how such content is posted?