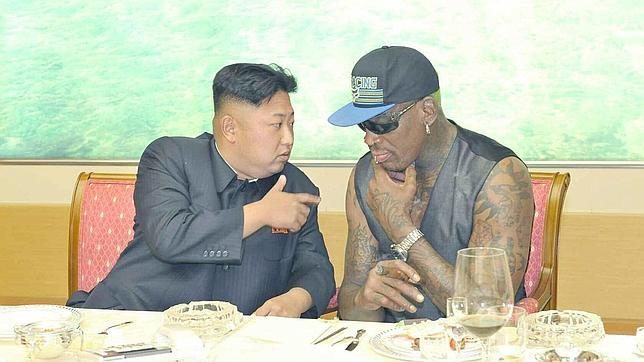 Former NBA start, Dennis Rodman is on another trip to North Korea where he is welcomed by Kim Jong-un. Rodman considers the dictator to be a close friend and has spent a significant amount of time with Jong-un on his previous trip. At the same time, Rodman has said that he is friends with President Trump as well.

Rodman’s motive for the trip is unknown but he did claim that it is to “open the door”, which he means for stabilizing relations between the U.S. and North Korea. The only other reason he has given for his visit is “basketball diplomacy.” Rodman’s visit comes at a time of high tensions and the release of an American citizen after only 17 months of a 15 year sentence.

On his arrival, he was not able to see Kim Jong-un but had passed gifts on to the Minister of Sports. He gifted the dictator two signed jerseys, two sets of soap, a jigsaw puzzle, a copy of “Where’s Waldo”, and a copy of President Trump’s “The Art of the Deal.”

The gifts seem to also be for the family of the dictator but gifting a copy of President Trump’s book seems to be the gift that sticks out. It is not clear if there is a deeper meaning behind gifting the President’s book but it seems that it is meant to send a message.

Rodman’s choice of gifting Trumps book is making the media question if it will allow North Korea to know more about what the president is thinks. This may be a little crazy, if they wanted the book, they could get the book and distancing the U.S. from them will not stop them. With the tensions between countries, it is probably safe to say that they have already read the book.

The big question is, could Rodman be working with Trump to smooth over relations with the dictator?

Many of the main stream media outlets have ran with similar questions. The  U.S. national security officials told CNN that “Rodman was not acting as a representative of the US government or President Donald Trump and stated that he does not believe that the President has spoken to Rodman since entering office.” They had added that there is no connection between Rodman’s visit and the release of the detained American.

We have seen that the government does not always tell us the truth and should not in the case that Rodman is working with the U.S. government. If he is, there is no reason to make that public and draw attention to it and possibly create more tensions with North Korea.

Maybe he is working with the U.S. government. It may take an individual that is a little crazy, like Rodman, to reason with a leader like Jong-un. It does help that Rodman can relate to Kim Jong-un with their love for basketball. On top of that, he is one of few people that have gotten close to the North Korean leader.

The chance that he is working with the U.S. as an ambassador is very small but there is always the possibility. He could be taking it in his own hands and trying to release some of the tensions. His real reason for the visit is unknown and will likely stay unknown but it does create questions because of the timing of the visit.