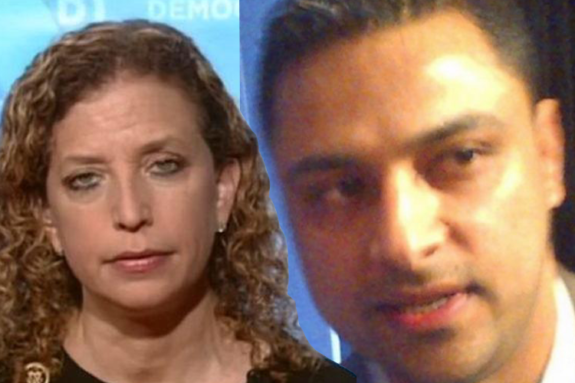 Democrats are scrambling over the recent activity surrounding the Muslim Band of Brothers who worked for the DNC over the past few years as IT Specialists.  This story must be really big due to the fact that the liberal mainstream media has not reported on it.

There is a complete media blackout on the story!  Now we know why!

The fake news media cable networks have completely shut down coverage on one of the biggest scandals from the Democrat Party since former DNC worker Seth Rich was murdered.

Debbie Wasserman Schultz employed Pakistani IT staffers and brothers who were paid over $4 million dollars over the course of their employment even though they were accused of a cyber-security breach.

Imran and his Muslim brothers, Abid and Jamal accessed unauthorized computers while acting as IT specialists. The three brothers were making $161,000, $165,000, and $160,000 and one of the brothers has a criminal background.

The Gateway Pundit previously reported the FBI seized smashed hard drives belonging to Imran Awan. We also reported that former Chairman of the DNC, Debbie Wasserman Schultz, threatened the chief of the U.S. Capitol Police with ‘consequences’ for holding equipment that she says belonged to her in order to build a criminal case against a Pakistani IT staffer suspected of massive cybersecurity breaches.

We now know why the former Head of the DNC was so angry and hell bent on obtaining the material being held by the police.

One of the brothers is on record meeting in the Obama White House for several hours.

A search of guests at the White House show that Imran’s younger brother Abid was a guest at the White House on Thursday, November 21, 2013.  He arrived at 5pm and didn’t depart for 7 hours.  He attended with another 17 individuals.

What was the IT Specialist doing at the White House for 7 hours after 5pm in 2013, why was he there, who was with him and where was Obama?

Why did Obama's staff hold a 7 hr. meeting at the White House with #ImranAwan's brother Abid Awan? Who are the 17 people? For what purpose? pic.twitter.com/uG0wOU5I2N