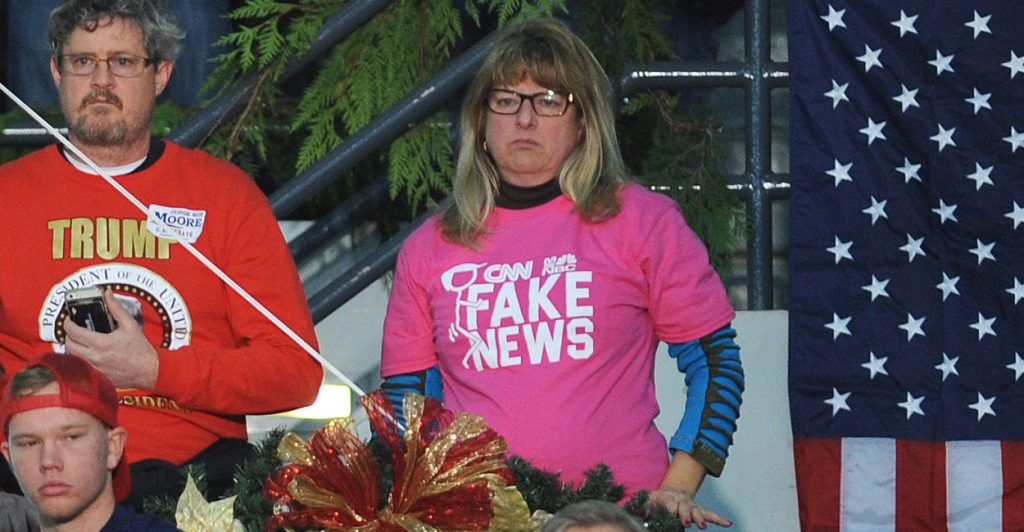 The issue of fake news is very much in the news, as it were, and President Donald Trump is being compared to Stalin for his dismissal of journalists who are purveyors of it as “enemies of the American people.”

It may be good to jog our memory back to how the term “fake news” arrived among us.

Only then do we remember that it first was intended to be used as a weapon in a sustained campaign by liberals to regain their former monopoly over news delivery, and end one of the most important and hard-won victories by conservatives—the information diversity that arrived with the internet.

Disinformation, of course, has been among us since man first began to use language, sought to conceal something, and lied about it. So a very long time.

But the present use of the term fake news is of much more recent vintage, as we can see in this chart:

Internet searches for “fake news” really kicked up in early November 2016. It is to then that we can trace this Nov. 6, 2016, article by The New York Times’ media critic, Jim Rutenberg, credited with the first use of the term.

“The internet-borne forces that are eating away at print advertising are enabling a host of faux-journalistic players to pollute the democracy with dangerously fake news items,” Rutenberg wrote.

The purpose of Rutenberg’s jeremiad was to draw attention to the secular demise of mainstream newspaper outlets and decry the success of conservative outlets.

Rutenberg’s evidence was comprised of outrageous examples of conspiracy mongering by alt-right sites—content, he complained, that can “live alongside that of The Times or The Boston Globe or The Washington Post on the Facebook newsfeed and be just as well read, if not more so.”

But it is clear from his piece that his real target was opinion diversity.

“If you have a society where people can’t agree on basic facts, how do you have a functioning democracy?” Rutenberg quoted The Washington Post’s executive editor, Martin Baron, as asking.

One of the biggest challenges we have to our democracy is the degree to which we don’t share a common baseline of facts. If you watch Fox News, you are living on a different planet than you are if you are listening to NPR.

We know which planet our 44th president inhabits, and which he thinks is in a galaxy far, far away.

We also know whose “basic facts” Rutenberg trusted: In his seminal 2016 column, he mentions the hard-left and equally conspiracy-driven MSNBC as a normal, mainstream network.

The loss of the previous progressive monopoly on the dissemination of news and analysis has poisoned the liberal soul since the internet came on the scene.

The left’s “fake news” campaign began, then, as an attempt to smear all legitimate conservative news purveyors, from Fox News Channel to The Weekly Standard to the Washington Examiner and, of course, The Daily Signal, that provide an alternative news selection and interpretation.

This effort to delegitimize conservative outlets went horribly wrong, of course, when Trump appropriated the term and weaponized it. I must admit that when the president started doing it, I thought it wouldn’t fly. The current brouhaha proves that I was wrong.

As a former journalist, I don’t particularly like calling newsmen “the enemies of the American people.” It is indeed a term once used by Stalin. (Though it hardly makes Trump a Stalinist, a distinction that should be reserved for those who actually massacre millions and oppress those who survive.)

My friends in the media are not enemies of the American people. But they are mostly liberal.

Ask the more existential question, “Do liberals like America?” and that’s harder to answer. Many liberals don’t hide their contempt for the U.S. (there are many, many examples; find them yourself) and many others still proffer to like an America I don’t recognize.

Which is why we should all be present in the marketplace of ideas. After gaining this beachhead, conservatives must protect it against what will be sustained attempts to dislodge them.

In 2014, I had a celebrated exchange with Darrell West and Beth Stone at Brookings Institution over their frightening call in a paper for digital platforms such as Facebook, Google, and Twitter to change their algorithms in a manner that would prioritize information from liberal sources.

But West and Stone won, and social networks are now “fact-checking” their content. As my colleague Katrina Trinko points out here, this is censoring the news.

Ending opinion diversity this way is the real threat to freedom of the press and the First Amendment, and what should keep those who worry about it awake at night.