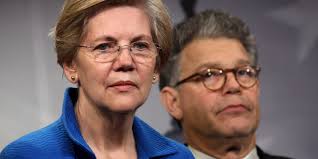 It’s been a week since allegations of sexual harassment and groping emerged against Democrat Senator Al Franken. Some on the left have issued condemnations, others are circling the wagons in his defense.

Over at SNL a number of women signed a letter of character, arguing Franken really is a good guy.

Franken himself has issued half sincere apologies, saying he doesn’t “remember” allegdely grabbing the behind of a young woman just a few years ago at the state fair because he “takes thousands of photos.” He’s refusing to resign.

But in the face of these allegations, where are the prominent feminists in the Senate? Massachusetts Senator Elizabeth Warren isn’t interested in addressing the resignation question directly and dodged it during an interview with Stephen Colbert earlier this year.

Sen. Elizabeth Warren is “enormously disappointed” in Sen. Al Franken and the other “famous men” who have been accused of sexual misconduct, but she wouldn’t answer Stephen Colbert when he asked if she thought Franken should resign.

“I knew Sen. Franken long before he was Sen. Franken and his wife Franni. These allegations are serious, and women have a right to be heard and listened to on this. Al is going to be subjected to a hearing in the United States Senate and an investigation. We have had, for a long time now in the Senate, long before I got there, a bipartisan ethics committee that meets on a regular basis, and he’s going to go in and answer.”